A Texan's First Trip to the Valley

Met my charges Dian and Richard from Austin this morning, and we headed out to Estero Llano Grande for some Valley specialty birding.  It was fairly quiet going in, but pretty soon we heard Buff-bellied Hummingbirds battling around the park host slot’s Turk’s Cap flowers, and soon after the happy whistle of an Altamira Oriole!  She only let us get a glimpse before taking off for parts unknown, however… L


Many of our “specialties” actually make it up to Austin, so we didn’t have to sweat Golden-fronted Woodpeckers and Black-crested Titmice, and thanks to a quick visit to Bentsen the day before they had already bagged Green Jays and Chachalacas, so we made our way through the Tropical Zone and, as is often the case, heard a lot but saw very little.  Some things, like the Clay-colored Thrush near Ben Basham’s place, and the Olive Sparrow near Tyrannulet Trail, only allowed fleeting glimpses, while near the butterfly garden a Couch’s Kingbird and Eastern Wood Pewee allowed scope views.  Several Kiskadees flew overhead (Richard had seen one the day before but Dian was looking the other direction J), and finally one landed in a tree and sat still enough for Dian to get a good look!  A Long-billed Thrasher actually cooperated for a nice view, while the Curve-billed only let us see his white tail corners…  A Carolina Wren actually popped up while trying to draw the thrushes out, and near the east side of the Zone a feeding flock went through that gave us a female Black-throated Green Warbler, which was a life bird for Dian!  On the way back to the main road a White-tipped Dove came out on the pavement briefly. 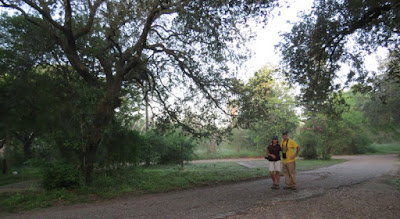 Dian and Richard in the Tropical Zone

Heading down the brick walkway towards the visitor’s center, a Green Kingfisher ticked unseen in the canal next to the trail, and Red-winged Blackbirds dominated the feeders.  After checking in we opted to check Ibis Pond from the boardwalk on the way back, seeing as the sun was at an awful angle, but as we headed toward the hummer feeders a flock of White-faced Ibis flew overhead!  A few minutes’ wait at the feeder finally bagged a good look at a Buffbelly, but then I heard a distant Groove-billed Ani, so we headed down the trail in search of him.  Unfortunately he remained very distant, so the best I could do was point out the call… 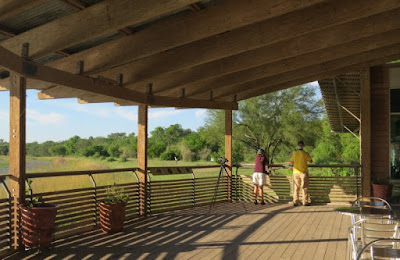 Checking out the feeders from the deck

We kept leapfrogging with Ranger John, who was taking two ladies on a bird walk; out at Dowitcher Pond we had our first looks at Least Grebe (along with tons of coots; they were sharing with me how the Hawaiian Coots have longer toes so they can more easily walk on the lava) and the ever-present Spotted Sandpiper.  At Grebe Marsh we had another pair of Least Grebes in a little better light, and we were looking at what turned out to be an Eastern Phoebe when Dian spotted a Green Kingfisher on one of the dead sticks!  At Alligator Lake a Yellow-crowned Night Heron dutifully showed off, but I was anxious to find the Pauraque, and was a little nervous when we couldn’t spot him right away!  Hearing John down the trail I assumed he had the bird that hangs at the foot of the overlook, but he didn’t, and informed us that the two Pauraques were there at their normal spot!  After enjoying an Anhinga at the overlook (and being joined by another birder, plus a mother and little girl), our whole mob headed back to the “spot”, where now John was sweating because the birds had disappeared!  I was anticipating a lot of hard looking when Dian suddenly said, “I see it!”  It was tucked tail in to the tree, and when she went around to get a better angle for a picture, she declared there were two birds!  Both Richard and I insisted that she was looking at the same bird at a different angle behind the tree, but she got us to where we could actually see the two birds, which were both tail in at the same angle!  (Guess you had to be there…) 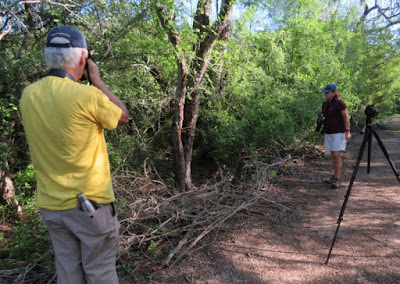 Playing the "Spot the Pauraque" game... 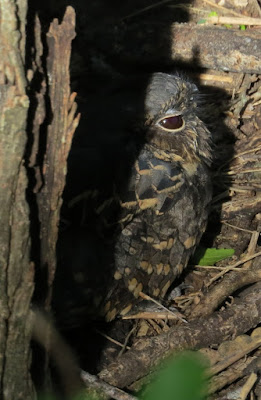 One of two birds hiding cryptically behind a tree!

After enjoying them we snuck around to see if the McCall’s Screech Owl was in his box, and thankfully he was!  John had been telling us about their plight with the crazy ants, and we saw the bird scratch at his face and then take off, but then his mate popped up!  Through the scope you could see the box was covered with ants, and we felt so helpless; these things are almost impossible to eradicate. 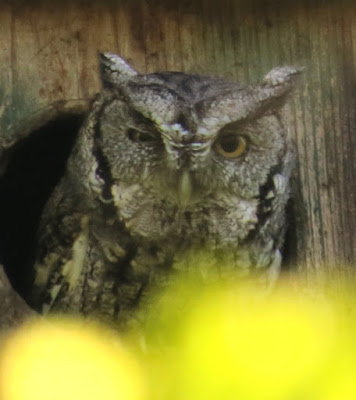 One of the "McCall's" Screech Owl pairs looks at us cross-eyed...


After a peek at Ibis Pond in better light (along with another pair of Least Grebes, which led to a discussion on the “correct” pronunciation of various bird names), with what little time we had left we decided to head over to Frontera Audubon for another chance at the thrush and other skulky birds.  I had forgotten that the place normally doesn’t open till 1:00 on Sundays, but the gate was open, so we rolled on in – turns out they were having a meeting of some sort, but Chris very graciously opened up the trails for us, and we were on our way!  Well, we tried to be on our way but intermittent Green Parakeet screeching sent me running back to the open area at least twice, but we never could spot them (got Inca Doves instead)…


Inside, we just slowly walked the trails and again heard more than we could spot:  a Beardless Tyrannulet and Gray Hawk called in the distance, and a couple of Wilson’s Warblers called closer and actually let us see them.  Dian spooked a Ringed Kingfisher off a branch near the boardwalk, but I never saw it, nor did it even vocalize! L  The boardwalk had a lot of odes (I pointed out both male and female Eastern Pondhawks to them), and they loved the Sabal Palm Grove, where the White-tipped Doves called hauntingly.  The cemetery had a few Couch’s Kingbirds, a Cooper’s Hawk flew overhead obligingly, and a dull Nashville Warbler showed herself.  We chatted a little bit about rare birds that had shown up there, and even though the feeders hadn’t been stocked, we decided to give them some time anyway and enjoyed more Buff-bellied Hummers and White-tipped Doves (and the Ringed Kingfisher rattled in the distance, so I could count it for my own list J).  When it was time to go, we were heading back towards the entrance when a family of Clay-colored Thrushes decided to show nicely!  That was a very nice ending to the morning with a modest 62 count of species! 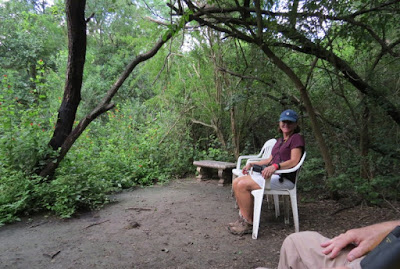 Dian at one of the feeding areas 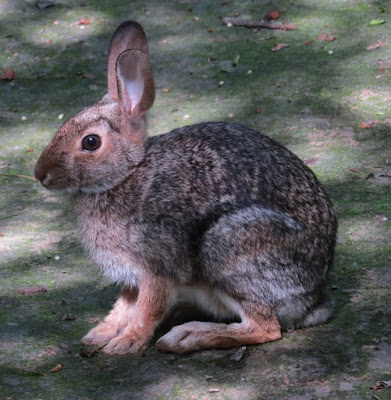 At least an Eastern Cottontail was cooperative for pictures! 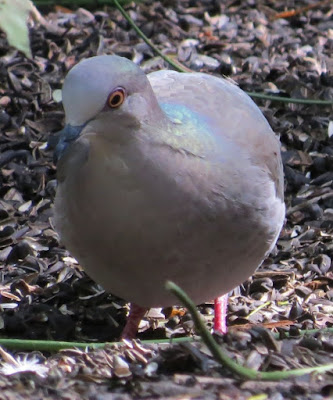