Hunt for the Blob


I initially was going to survey the Boca Chica Route this morning, but after getting wind of a pair of Swallow-tailed Kites that had apparently bedded down near the McAllen Parrot Roost Thursday night, my friend Baceliza and I headed out there early Friday morning to see if we could find them before they lifted off.  We got a good exercise walk instead J but did find the giant oak woodland in a gated community that the birds had apparently gone to, seeing tons of Clay-colored Thrushes and a few Orchard Orioles.  The best bird was a young Gray Hawk that we flushed. 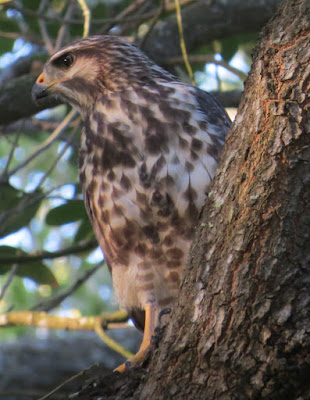 Immature Gray Hawk in an urban neighborhood in McAllen

But in conversation it came out that she had never seen a Ferruginous Pygmy Owl, and the one up along Brushline Road was still being reported, so she and her husband Alan were game to go after that Saturday, and by promising my friend Pat that we’d wrap up by 10:00 J we talked her into coming as well!  So after meeting at the Flying J in Edinburg we all piled into Heppy and headed up.  Just after turning north onto Brushline from SR 186 I stopped and stepped out long enough to start the eBird list, and the place was alive with birdsong:  the first thing to hit the air after I got out was a flyover Upland Sandpiper!  A Long-billed Curlew came by shortly after that, and besides the Common Nighthawk beenting overhead, there were lots of Verdin, Olive Sparrows, a Curve-billed Thrasher (amongst the abundant Mockingbirds), Kiskadees, Bewick’s Wrens, Yellow-billed Cuckoos, and even a distant Roadrunner! 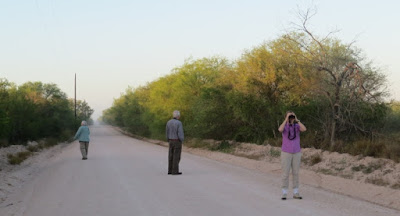 Pat, Alan, and Baceliza comb the mesquites for the elusive Ferruginous Pygmy Owl

The spot where the owl was hanging out was only a mile up the road, so we headed up there and parked, scrutinizing the mesquites carefully.  Pat wandered down the road until she heard some Mockingbirds mobbing something and waved us all down, and after some diligent looking, Baceliza did find a blob that looked the right size and shape, and looked to be turning its head, but being against the light it was hard to tell.  Pat only saw a blob, and I couldn’t find it at all before it was suddenly gone (and the cacophony suddenly ended as well), so I would have been willing to bet an ice cream that was probably the Ferruginous Pygmy, but for poor Baceliza that just wasn’t a countable look.  We comforted her with the fact that the thing’s been reported almost daily for a couple of months, so she and Alan would undoubtedly have more chances, now that they knew the area it had been showing up (along with a second bird according to some reports), and to follow the mobbing!


We continued north after that, getting great looks at the cuckoo family:  Yellow-billed Cuckoos, Groove-billed Anis, and even a pair of Roadrunners trotting down the road in front of us, wagging their tails as they went!  The ranch entrance at the end of Chapa Road was hopping with three female/young flycatchers: Vermilion, Scissor-tailed, and an unidentified kingbird!  An odd thick-billed thing popped up and left that after much mulling over I finally decided was a young Blue Grosbeak, and while we heard Cactus Wren we never did see one.  One of the oddest birds was a flyover Green Heron, which we saw later on a wire! 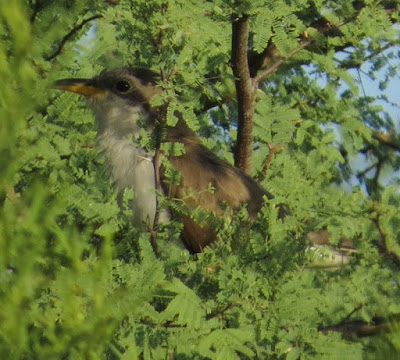 Yellow-billed Cuckoo (that was sitting right in the open until I got the camera out...) 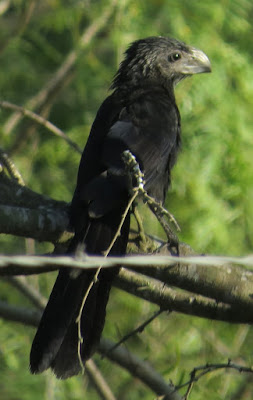 Pat was interested in getting Botteri’s Sparrow for the county, as this was an area I’d had them in the past, but not recently, and not today, alas.  We did hear a distant Cassin’s, and several Lark Sparrows and even a couple of Black-throated made an appearance.  Mourning Doves were out the yin yang, so we had to scrutinize the flocks on the road before plowing through them to make sure we weren’t ignoring Bobwhite, Pyrrhuloxias, or even Ground Doves!  After Brushline turned east we spotted a single Harris’s Hawk in a tree, and at the farm pond at the end of the road a good number of water birds were concentrated as most of it was dry:  lots of Black-necked Stilts and Snowy Egrets (with a token Great flying around), a handful of both yellowlegs, and a few Semipalmated Sandpipers in amongst all the Leasts.  Coming back out, the road-killed Armadillo we had passed had suddenly been discovered by a cadre of both Black and Turkey Vultures and a whole gang of Caracaras!  That was quite the show, especially watching the caracaras throwing their heads back and rattling at each other! 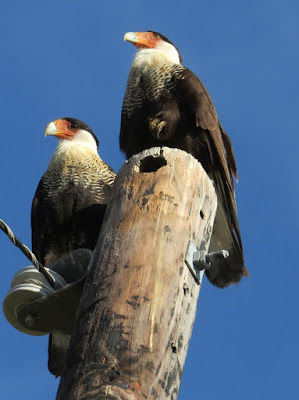 Crested Caracara pair on a pole (where they usually are)

...and on the ground, where they sometimes are when there's been a road kill!  (Turkey Vulture on the right - even though they're bigger, I've noticed that they tend to defer to the Caracaras...)

These are all youngsters, as what will be white as an adult is now creamy, but the one with a blue face is even younger! 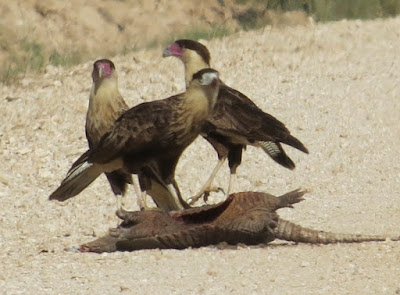 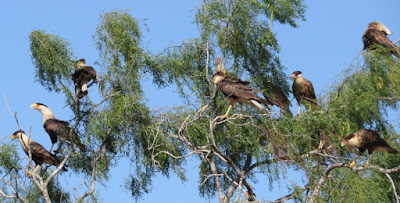 Many more wait their turn in a tree (note the guy on the upper right throwing his head back in a rattle)!

We took it slow going back by the owl spot, but didn’t hear any mobbing, so called it quits for that eBird report.  But that wasn’t the end of the birding as we picked up tons of Cave Swallows nesting under the overpass at the freeway, and Pat spotted a Swainson’s Hawk at the Flying J parking lot!  For a short morning, we didn’t do badly with 55 species.  Bird List: