Sometimes you need to be ready to guide someone at a moment’s notice, and seeing as this was “Rob and Vicky’s” first time to the Valley, I initially thought of taking them to one of the local parks for Valley specialties, but then got to thinking that the advantage of having a guide is that they can take you on these back roads that a non-local might be reticent to explore, so when I suggested Old Port Isabel Road for a crack at the Aplomado Falcon, they readily agreed!


The bird had recently been seen at the hacking platform close to the south end of the road, so shortly after reaching the dirt portion, we first stepped out to listen and log some of the common things, primary of which were whistling Eastern Meadowlarks.  Loma Alta Lake had lots of coots and other things we couldn’t quite pick out because of the angle of the sun, and past the railroad tracks we found the platform in the distance, but it looked like something Osprey-size was sitting on it.  We passed the irrigation channel (with more coots) and maneuvered ourselves to try and get a better view of the platform.  This time we hit pay dirt as an Aplomado was sitting down behind the “bars” with his back to us, but then decided to hop up on top, giving great views! 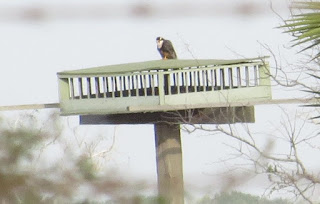 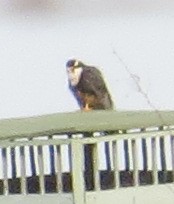 View of the hacking platform with a blow-up of the Aplomado Falcon on the right.


With the pressure off, we crawled along looking for other open country birds.  A White-tailed Kite put on a nice show by hovering several time right outside the car, and a Cassin’s Sparrow did perch briefly on a wire fence, but not long enough for Rob and Vickie to get a view.  A pair of Curve-billed Thrashers was more cooperative, however, along with a Bewick’s Wren singing his little heart out!  There were several Long-billed Curlews calling and flying about, and at a couple of small ponds we had Least Grebes and a good variety of ducks, including a pair of Buffleheads!  I was disappointed in that neither whistling duck showed up (the duck show in general was rather sparse), but that’s how it goes…  Within sight of the SR 100 billboards we were turned back by the same muddy mess that turned us back last time, so we scooted south, but not before witnessing a dogfight between a harrier and a White-tailed Hawk! 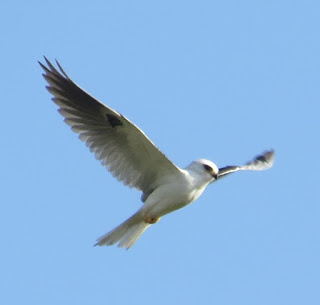 
My guests had birded their way down the coast already, and Vickie mentioned that Rob had seen an oystercatcher that she missed, so we headed up to the Highway 48 Boat Ramp in hopes of bagging at least one of the pair that hangs out there.  Again, I was disappointed (and surprised) at the lack of birds there, as usually the place is inundated with stuff!  Thankfully we spotted the oystercatchers on a spit out in the bay, but a gull caught my attention that was hanging with three much larger Herring Gulls:  being from San Diego, the first thing that struck me was the long, pink, black-tipped bill and smaller size that screamed “California Gull” to me, but that would be highly unusual (although not unheard of) here!  In fact, I’m still waiting for some feedback on this interesting guy!  Just before we left a huge wave of Black Skimmers wheeled in and gave us a show! 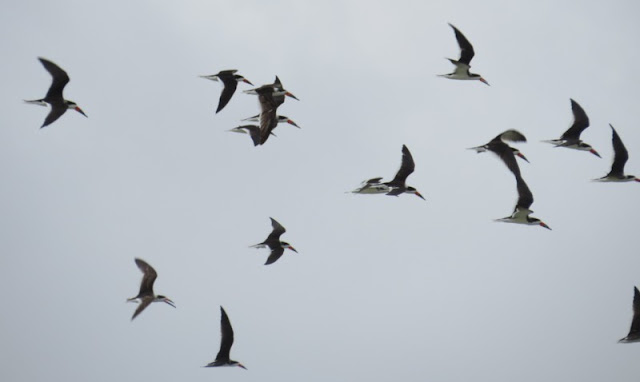 The gull on the right reminded me of a California Gull, with its smaller size (next to the Herring Gulls on the left) and long, pink, black-tipped bill. 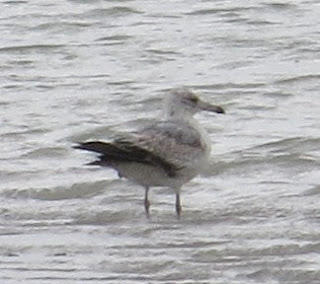 Two more shots; the jury is still out, apparently... 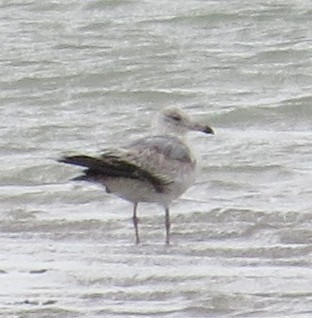