One Missed Target, but Lots of Gifts!


Today’s goal was to get the Elf Owl under my belt for the year, since I surprisingly missed it during the Hidalgo Big Day in April, so I headed out to Bentsen SP planning to arrive an hour before dawn.  What I wasn’t prepared for was all the cars in the parking lot at 5:45!!  Shortly a pair of headlamps came bobbing towards me – turned out to be a running club whose members were getting their run in before the sun came up, seeing as it was already 80 degrees out!


Headed towards the entrance, picking up Pauraques right away, and once at the Nature Center I encountered a presumed family of “McCall’s” Screech Owls all trilling away, but what intrigued me was the fact that one of them was doing the descending whinny that’s typical of more northern screech owls, and apparently “un-uttered” by McCall’s!  (Unfortunately I wasn’t on the ball enough to get a recording… L)  Alas, there was nary a bark or chuckle from an Elf Owl L (or even a Great Horned for that matter), so headed on down to the resaca to see the dawn in.  It wasn’t nearly as “noisy” as in April, of course;  a distant Altamira Oriole sang its happy song, and as it got light enough to see a Ringed Kingfisher sailed overhead giving its flight call.  White-winged, White-tipped, and Mourning Doves all added to the morning chorus, and on the way back to the parking lot had some nice additions, the most special of which was a baby Groove-billed Ani with Momma/Daddy close beside!  A Gray Hawk whistled from somewhere, and on the road near the bench I usually rest at was a presumed family of Green Jays bouncing around and getting something – have no idea what – when a Long-billed Thrasher came running out to join the party!  At the canal a mob of young Cave Swallows lined the overhead wires, and a scruffy-looking Black Phoebe sang and showed.  A couple of Olive Sparrows poked along on the path through the butterfly garden on the way to the parking lot.

Since it was going to be too hot to do a “formal” survey of Bentsen, I had decided to do a “mini Big Day” by following the route I normally do for a bona fide Big Day, and just quit at noon.  So the next “stop” was actually a drive down Old Military Highway, and this time by taking the real road (instead of taking that dirt road that parallels the canal) I bagged the Eastern Meadowlark!  The Blue Grosbeak was still in his same spot across from the old Walking Trail near the National Butterfly Center, and by stopping again up on the paved portion of the levee, I was pleasantly surprised to turn around and see an unperturbed Harris’ Hawk sitting on a power pole!  Even though the gate to the caliche levee was open, there are signs making it crystal clear that it’s now a restricted area (sadly, as that was a terrific birding road, but I certainly understand their reasonings), so I took the “new” Military Highway to Conway and then down to the accessible part of the levee by Chimney Park.  I made a brief stop before hitting Conway, as there’s still some good habitat along here, and picked up a couple of Scissor-tailed Flycatchers for the list.

Harris' Hawk in the sun 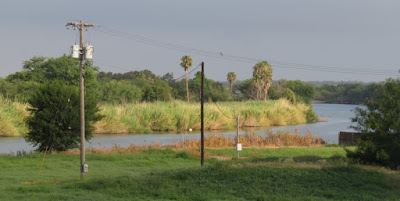 Rio Grande from the levee

After birding the rest of the levee, adding only a line of Purple Martins, I headed to Anzalduas.  A stop at the “fishing corner” produced another Ringed Kingfisher, and heard a Beardless Tyrannulet calling near the levee.  A Yellow-billed Cuckoo flew into a tree near the boat ramp, and I thought I heard a House Finch but after stopping I didn’t hear any more “finchy” sounds, so I let that one go.  A Bronzed Cowbird was talking to himself as he strutted through the grass, and on the way to the dam a Killdeer crossed the road and acted like it was getting ready to either do a distraction display or settle on a nest!  Easily added the nesting Cliff Swallows at the dam with another Black Phoebe on the barbed wire, and on the way out a Clay-colored Thrush was singing away!  The biggest surprise was a Bobwhite calling as I exited the park!  And although already on the list, it was fun to see tons of Purple Martins staging on the wires in Granjeño like grackles do in the city!

Anzalduas and the Rio Grande from the entrance levee 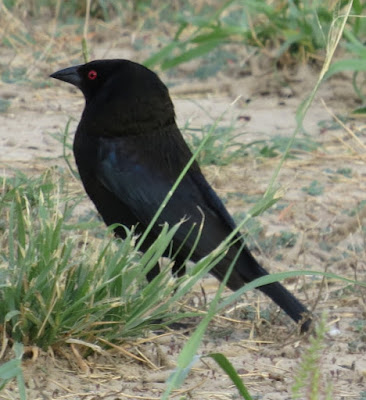 Quinta Mazatlan was next, where the faithful Curve-billed Thrasher showed in the parking lot.  The trails were rather sparse except for a Giant Swallowtail that was floating around, but the only butter to pose for pictures was a Snout…  Just past the turnoff to the Ebony Grove a family of Chachalacas posed at my feet while Green Parakeets went screeching overhead! 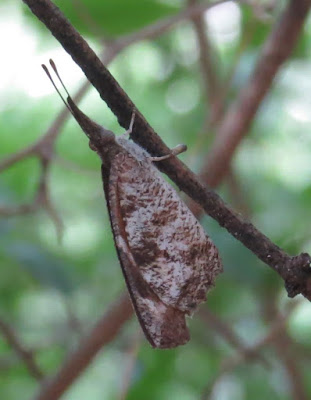 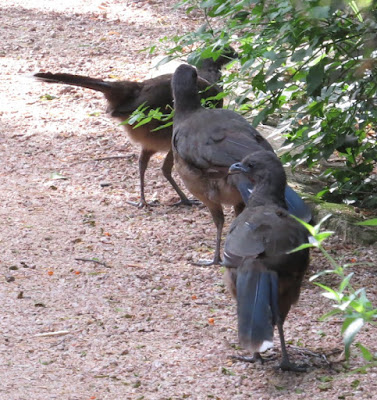 Plain Chachalacas (above and below) 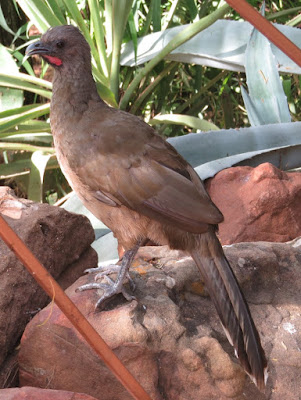 Headed north to Edinburg Scenic Wetlands after that, where I checked out the South Pond first; there I found tons of croaking Neotropic Cormorants and egrets (both “Greg and Sneg”), some Black-necked Stilts, and a few Black-bellied Whistling Ducks.  The north side was pretty productive, with Buff-bellied Hummers blasting about; I ran into a young guy with a big camera who had just seen a Green Kingfisher (I missed that one) but was hoping for a Ringed.  In the North Pond were lots more egrets along with both Green and Yellow-crowned Night Herons (the latter was pretty close to the trail), and the spillway had a couple of Black-crowned Nighties.  I was surprised to see an Osprey sitting across the way this time of year, but eBird liked it!  Besides fighting Mockingbirds the most interesting thing in the gardens themselves was a flighty Julia Heliconian.

Neotropic Cormorants; notice how the one on the left apparently hears his "name being called" and waddles over to the adult who's croaking! 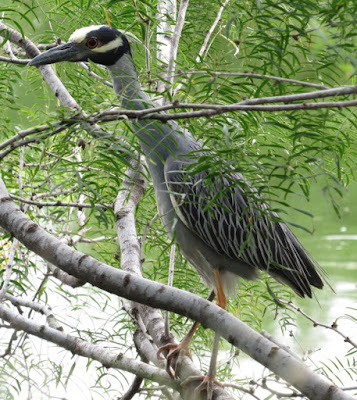 Rather than go all the way up to La Sal del Rey (which is normally the next stop on a Big Day route), I decided to do Wallace Road, which not only was closer but has some good wetland habitat.  That turned out to be a great decision: in the ag fields added Horned Lark and Dickcissels, and in the thornscrub added Western Kingbirds, Lark Sparrows, Painted Buntings, Common Ground Doves, and had many more Blue Grosbeaks!  Surprisingly, I had no raptors except a Turkey Vulture, but the wetlands were superb:  the biggest surprise was a mob of Wood Storks (looked to be mostly youngsters), along with a few White Ibis and a couple of Anhingas (that I didn’t notice until I was processing the pictures J)!  Baby grebes were vocalizing, but I couldn’t spot anything except a pair of Mottled Ducks and a Common Gallinule; thankfully a Pied-billed “sang”, so I could at least log that one!  In the back one of the western ponds was a handful of Roseate Spoonbills, always fun to get inland! 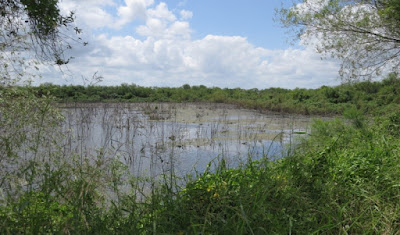 East side wetland - sometimes these can be bone dry! 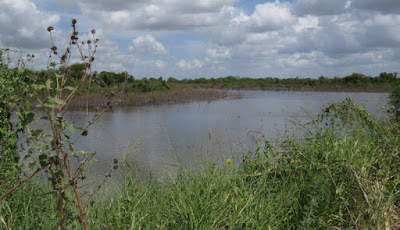 Wood Storks (with a couple of Great Egrets)

That pretty much took me up to noon, so I called it quits and headed home with 78 species for the morning; no year birds, but the quality couldn’t be beat!  Bird list: