A Push for the Century Mark

By the time June rolls around, adding year birds to your list (unless you take a road trip elsewhere in the state) can be tough, so that’s when you resort to at least building up your month list!  J  I couldn’t stand the thought of closing out the month with under 100 species recorded, so a report of a Brown Booby near the Boca Chica jetties (plus the fact that I was hurting on coastal birds – even the Boca Chica survey only added a handful) sent me to South Padre Island, where said jetties are a little easier to get to!  My friend Pat was game, so we started out pre-dawn, and by going by way of the toll road, that took us by the SR48 boat ramp, so she suggested we stop before the sun got high enough over the horizon to cause a viewing problem!  That turned out to be a productive stop, adding both Black-bellied and Semipalmated Plovers to the list (she saw a Wilson’s, but I didn’t sweat that one having picked it up along Boca Chica), plus the only Roseate Spoonbills of the day flying by! A lone Caracara sat across the way while a Chihuahuan Raven glided by.   The usual contingent of Laughing Gulls and regular terns (including some Forster’s) loafed, and an Eastern Meadowlark sang while we scanned.  Alas, we couldn’t spot an Oystercatcher (normally this is a reliable place for them) so we headed on to the Island.


We went straight to Isla Blanca Park, taking only a quick look into the little bay view area we usually stop at as the place was packed with vehicles already (added Black Terns in the process)!  Continuing to the jetties, we parked and headed down, enjoying the Great Blue Herons nesting on the towers in the channel, and scanning the jetties added some Least Terns fluttering around.  It looked as though there was a little tent city across the way on the north end of Boca Chica Beach, but try as we might, we couldn’t find anything even resembling a booby (although Pat picked out a Ruddy Turnstone on the rocks).  The end of our jetty was packed with fisher-people, however (it was rather amusing looking at the mob through the bins and about all you could see was fishing poles sticking every which way like pins in a pincushion), and we were fascinated by this huge ship being guided into the channel by two pilot boats! 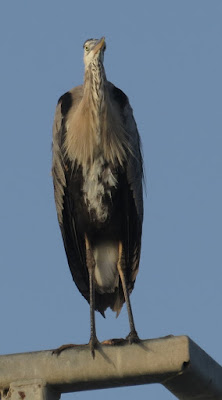 Base of the jetty looking west

Jetty looking east with the monster ship on its way in

Finally giving up on the booby (I didn’t hold out a lot of hope, frankly, but a trip to the Island is always fun regardless) we headed to The Flats, where about the only shorebirds we could pick up were a few Willets and a family of Black-necked Stilts, including some juveniles with crisp buffy feather-edging!  A handful of the regular terns were out there as well, but wrapping that up quickly we pulled into the Convention Centre, where we ran into a worker who told us that there was a fishing tournament going on – that explained the pincushion! J  Pat opted to relax in the shade and watch the now quiet gardens while I checked out the boardwalk:  the East Pond was pretty devoid of bird life except for the nesting stilts, but heading down the north leg to the pier, a Red-winged Blackbird seemed upset with my presence as he danced along the railing, a young Great Blue Heron stood motionless, and Common Nighthawks were batting overhead in broad daylight!  I rested for five under the shelter, hoping a frigatebird might sail by, but it was pretty quiet.  On the way back a Green Heron had replaced the Great Blue, and a Snowy Egret was on a dead stump seemingly fascinated with a leafy branch in the water!  Checking out the other leg I at least heard a Least Bittern cackle, while a Common Gallinule briefly showed, with an unseen chick calling nearby. 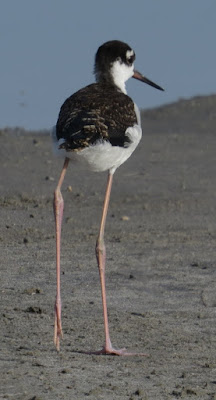 Juvie Black-necked Stilt (above and below) - note the crisp feather edging! 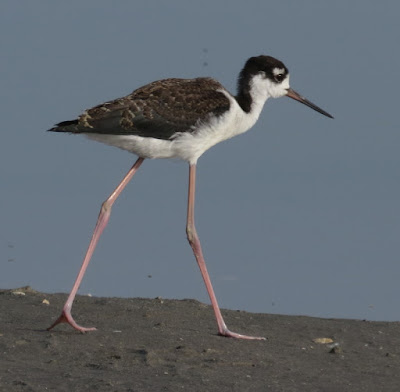 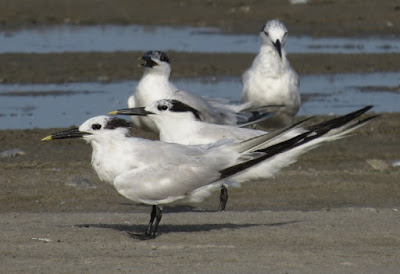 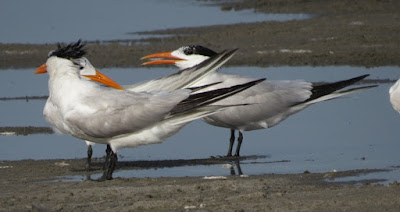 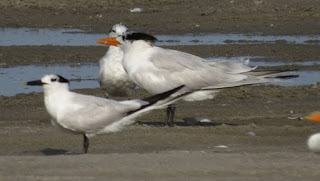 Both together (note the size difference) 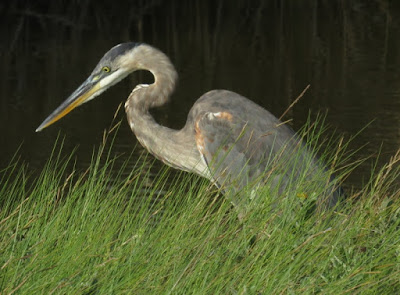 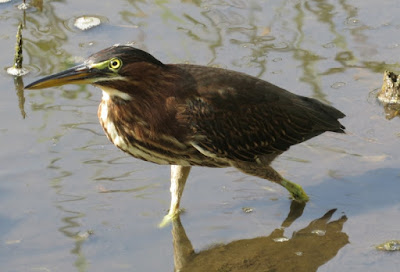 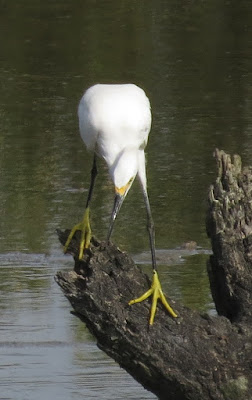 Snowy Egret fascinated by a branch in the water 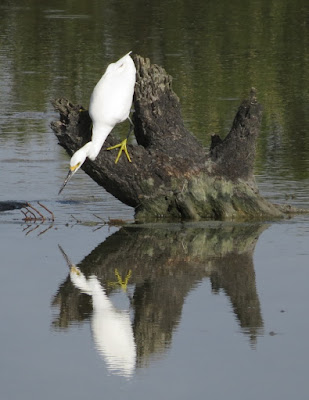 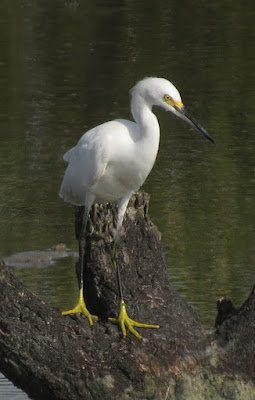 Pat had picked up a couple of squabbling Brown-crested Flycatchers while I was out, but that was about it for the songbirds.  We bypassed the Birding Center and went straight to Sheepshead, only because one year I had a young Golden-cheeked Warbler show up in the middle of summer, so you never know!  This time I don’t think we had anything but grackles and Collared Doves, so we continued on to the Port Isabel Reservoir (PIR).  First we made a quick visit to the golf course village next door to the PIR, as this was a spot Michael Marsden had cottoned us onto one fall.  Way in the back was another mudflat, but the birds were way out there, and with the heat waves we really couldn’t pick up anything.  So on to PIR, and again Pat opted to stay in the car with the AC running while I checked the place out:  there were several Reddish Egrets out there (mostly white morphs) and some Killdeer and lots of cormorants, but no new shorebirds. L 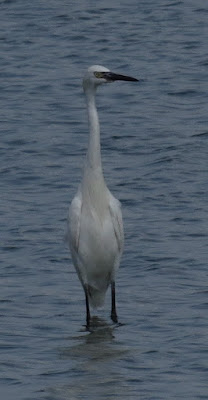 So we headed home after that, picking up a pair of Harris’ Hawks along SR100, and while stopping at the Stripes at Laguna Vista we picked up a handful of Valley songbirds for the day list!  We ended up with a modest 54 species for the morning (the Lesser Nighthawk was singing pre-dawn at my apartment), but the trip was a success in that it got me over 100 for the month (108 to be exact)! J  Bird list: