Jim and Russell were cousins who decided to take a “guy getaway” to the Valley; Jim from Phoenix had been a birder for a while, but Russell was just getting into it, so almost everything was new!  They definitely wanted to go to the Island for migrants, although I was concerned that “the show” from last Sunday’s storm might be winding down.  Before we headed off we enjoyed a Tropical Kingbird tittering overhead right outside the Inn, along with the resident Black-bellied Whistling Ducks (Jim got a kick out of the fact that he had never seen ducks sitting on top of a building before)!


Jim also mentioned a report he had seen about Buff-breasted Sandpiper, which would be a lifer even for him, so we swung by Weaver Road in hopes of getting some grasspipers.  Russell’s first Horned Larks were in the “kind of” barren fields on the way to the sod farms (stuff was just sprouting in the rows), and once at the sod we saw some larger birds way out there, so we headed south, and just about that time a huge flock of American Golden Plovers wheeled in and gave great looks!  I thought I saw a Buff-breasted Sandpiper in with them so I got the scope on a few individuals, when suddenly they took off and landed right in front of us!  What looks!  An Upland Sandpiper called behind us and then flew into the field, a little distant, but at least to where we could get scope views!  (Russell also got better looks at his Horned Lark, too… J) 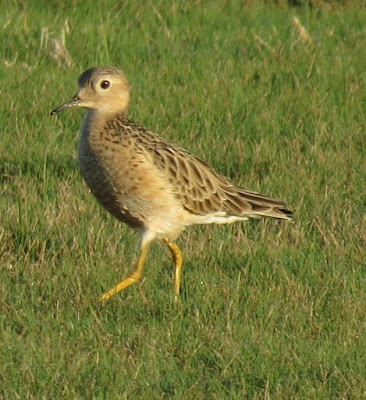 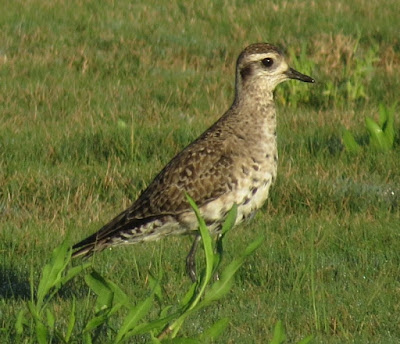 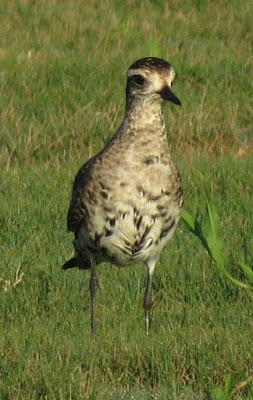 We cruised slowly along Jimenez to Rangerville Road, adding a few things to the day list (like distant chorusing Chachalacas and ringing Verdins), then headed to the freeway and South Padre.  I asked them if Aplomado Falcon was of interest, and indeed it was, so we stopped at the famous viewing area (where I was reasonably sure the female would be on the platform).  It wasn’t the greatest of looks, but suddenly I saw the male on our side of the platform – he really blended in!  The guys got an identifiable look, so they were happy, and we added the local Chihuahuan Raven for good measure. 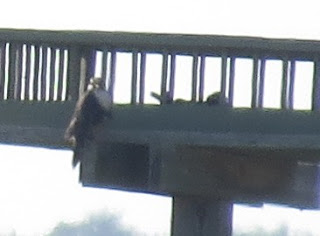 After a gas and potty stop at the Stripes, we headed over the causeway to the Island, where as we “came in for a landing” I spotted a Clapper Rail running across the open area on the right!  We quickly pulled into the crossover and found a parking spot, then carefully made our way across the street in between incoming cars; unfortunately we were never able to spot another one, but they were calling back and forth like nobody’s business!  A Whimbrel was huddled next to the vegetation, and there was a nice larid flock there, so the guys got to compare all three of the big terns, and their life Cave Swallows fluttered overhead and gathered mud for their nests!  We made the whole loop, got back to the car in one piece, and headed on to the Flats. 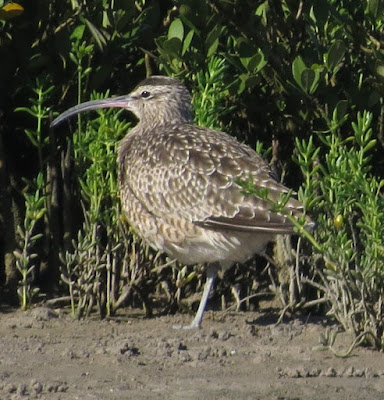 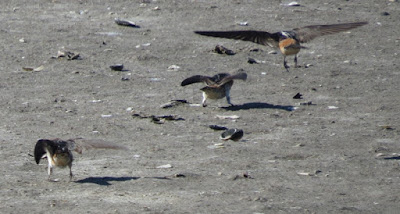 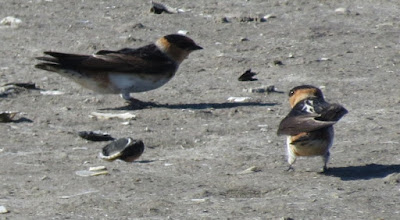 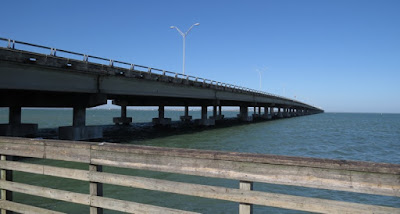 Causeway from the trail

Russell was driving their rental (a low-slung red Chevy, I think), so since the tide was reasonably out we poked in as far as he was comfortable and then walked the rest of the way to get decent scope views of the shorebirds.  Besides the usual Laughing Gulls and Black Skimmers, we found four Franklin’s Gulls and a nice assortment of shorebirds, including Marbled Godwits, a Ruddy Turnstone, and a couple of Dunlin in with the dowitchers, but no reported Red Knots or little plovers (we did however have another Golden wheel in behind us and land, in addition to the Black-bellieds, some in pretty breeding plumage).  A white morph Reddish Egret was in high breeding plumage as he pranced around in the bay, and three Snowy Egrets were out there for comparison as well. 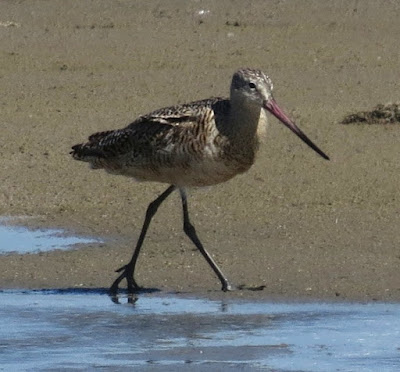 Treading carefully back to the car over slippery mud, we next went to the Convention Centre, where a Louisiana Waterthrush showed up at the water feature while the guys took a potty break (thankfully he came back for them)…  A Wilson’s Warbler also showed up, and on one small tree in the “back yard” we had a couple of pretty Orchard Orioles, a Northern Parula, and two Nashville Warblers show up!  Out back we had a dark morph Reddish Egret, but no rails on the mudflats.  Back in the “yard” things were pretty slow (a five minute sit on the “corner bench” only yielded an Orange-crowned Warbler), but as we were leaving a brilliant Scarlet Tanager shot in and landed right over our heads!  What a stunner! 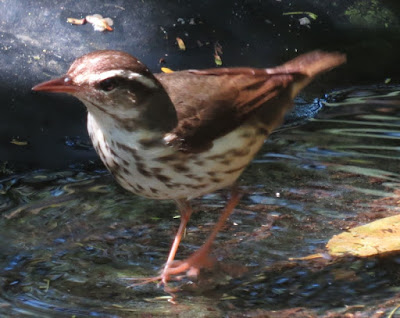 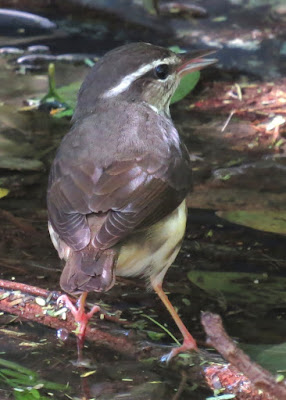 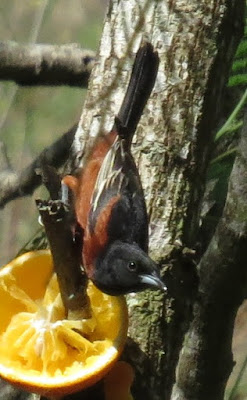 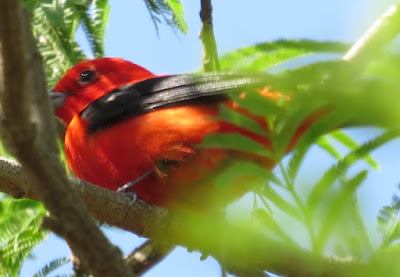 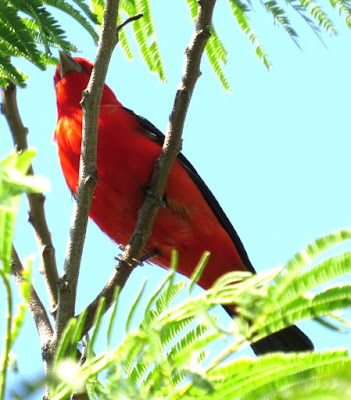 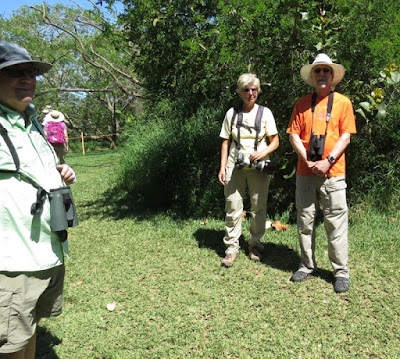 Jim (left) and Russell pose with volunteer Peggy, who helps put out oranges for hungry migrants!

We headed out onto the boardwalk after that, adding the usual spoonbills, Blue-winged Teal, yellowlegs, and the Solitary Sandpiper.  We couldn’t pull out any Least Bitterns, so we checked the other boardwalk real quick, where Jim spotted his life Scissor-tailed Flycatcher sitting out in the mangroves!  That was a lovely sight!  Coming back past the water feature several folks had a pretty Prothonotary Warbler in their sights! 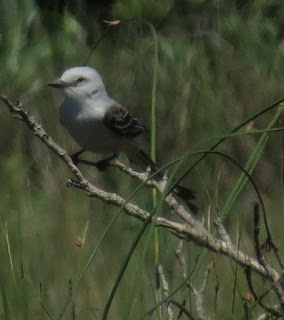 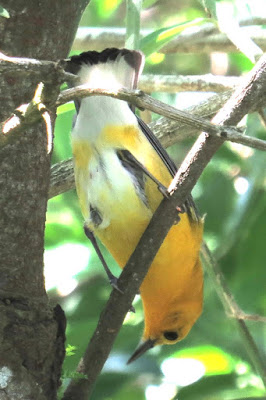 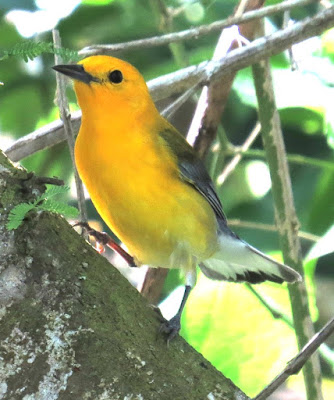 The guys were hungry, so we headed to Whataburger for Jim and Subway for Russell (I caved and had some chicken noodle soup which really hit the spot), then checked out Sheepshead.  It was really quiet there except for the Indigo Bunting pair that greeted us, and a Western Kingbird that made a brief appearance.  Over on the “dark side” it eventually was a little more exciting with another Northern Parula, a turning Baltimore Oriole, and my personal favorite, a fat Wood Thrush!  The guys saw a Prothonotary and Hooded Warbler, but I missed those… 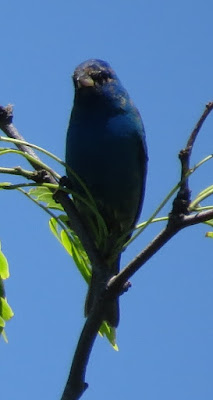 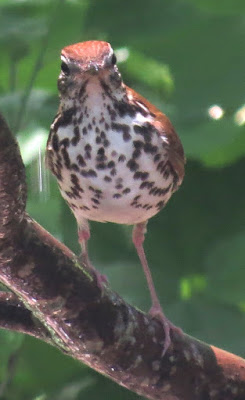 A Wood Thrush checks things out before going down to the water... 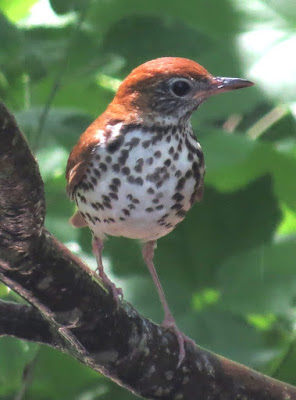 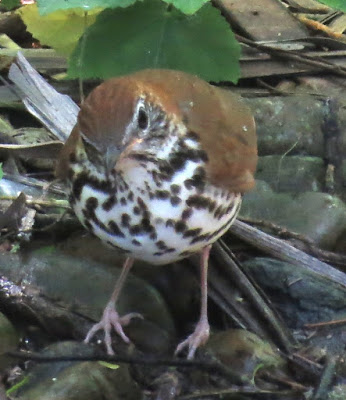 Interestingly, another report of a Tamaulipas Crow came over the RBA about that time, but this time it was a bird at the HEB in Port Isabel (with a photo), so after conferring we agreed to stop there on the way home and continue on to the Birding Center.  The Varied Bunting has been seen that morning but not since then, and with the wind we didn’t hold high hopes of seeing it, but we headed in and did manage to see a Catbird that Jim flushed!  Things were actually pretty quiet on the boardwalk as well, but we added the Osprey pair, a Spotted Sandpiper, a Tricolored Heron, the tame Redhead, and of course Mottled Ducks.  A peek out in the bay added a Neotropic Cormorant on a post, a flyby Long-billed Curlew and a pod of Pied-billed Grebes, and the Mangrove Warbler was still “singing his head off” but didn’t deign to let us have a look at him… L  The light was perfect for the many Black-bellied Whistling Ducks and Common Gallinules, and at one of the blinds while scanning the reeds, I actually spotted a Least Bittern, a lifer for both the guys!  Continuing on a photographer showed us a very focused Green Heron, and the East Pond gave us much better views of the spoonbills and shorebirds (although the Stilt Sandpiper disappeared before I could get Russell on him… L).  One of the guys pointed out a nearby Great Blue Heron with a huge fish that he eventually downed!  Back in the parking lot a Yellow-bellied Sapsucker came tearing into a tree in the middle section! 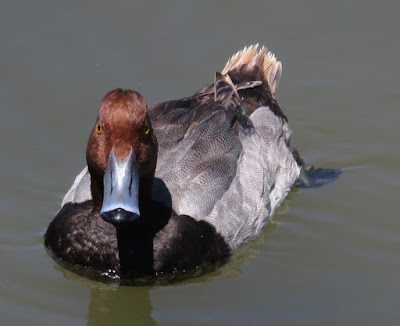 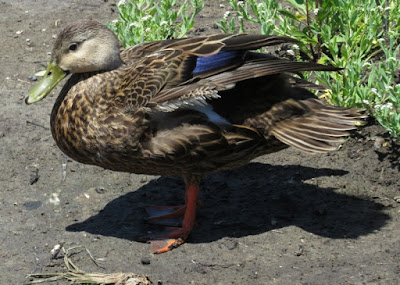 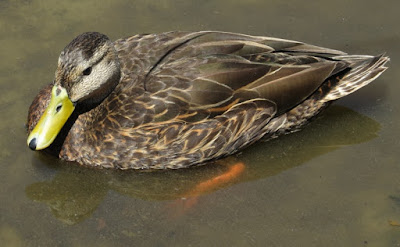 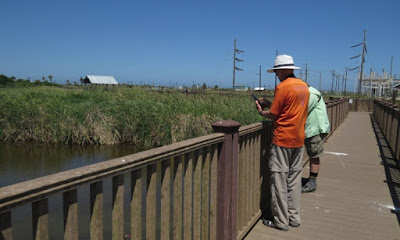 Russell and Jim enjoying the show 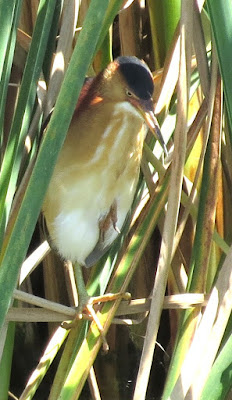 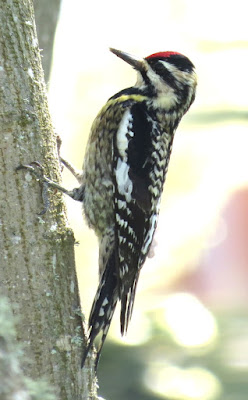 Russell wanted to watch the Richard Moore film they had running, so we enjoyed that before heading to try for the crow.  We made a couple of passes with no luck, so headed home, picking up a Caracara flying across SR 100 for the list.  We ended up with 96 species for the day (95 for me as I missed the Hooded Warbler)!  Bird list: