Peter from Seattle was celebrating his retirement by taking a big trip around Texas, so he came to the Valley to pick up a few things.  He had already spent time at the Island and Harlingen (particularly Hugh Ramsey Park) and bagged a lot of specialties there, so there were only a handful that I thought we could get in Hidalgo County, seeing as he didn’t want to travel too far afield while at the Inn.  So after going over his list I figured Santa Ana would be a good start, followed by road birding up along Brushline.


He was happy to learn some of the vocalizations, which was good as a lot of the little stinkers (including the coveted Beardless Tyrannulet) didn’t wanna come out!  Other stubborn stinkers included the Clay-colored Thrush in the parking lot, and the Carolina Wrens singing antiphonally all over the park!  Along Chachalaca Trail some of the more cooperative birds included the Couch’s Kingbird, Golden-fronted Woodpecker, and a pair of Black-crested Titmice that practically landed on us!  Down at Willow Lakes we added Least Grebe, Common Gallinule, Blue-winged Teal, and distant stilts to the list, and at the far lake a Belted Kingfisher had me going for a minute…  We kept trying to unsuccessfully spot Olive Sparrows, Brown-crested Flycatchers, and Altamira Orioles, so we finally gave up and headed over to Pintail Lakes where things were more open.  Along the cutoff trail Peter got on some little guys that looked like Chipping Sparrows to him, and thankfully I heard an Olive Sparrow on each side of the trail (which meant that chances were good that one of them was gonna dart across), and one of them did sit up and give Peter great views!  Whew! 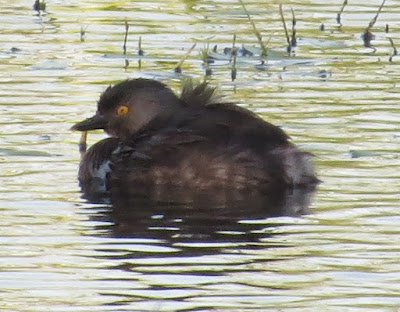 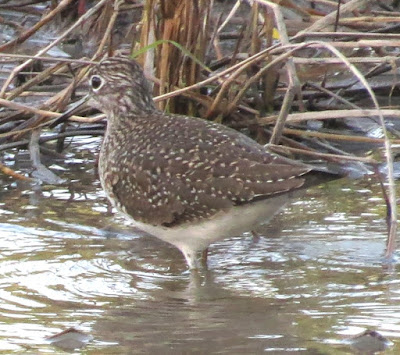 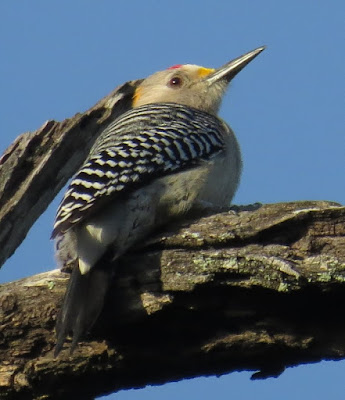 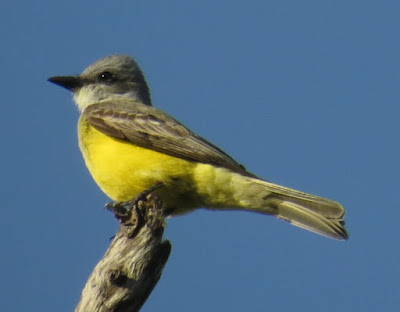 At Pintail Lakes the light was glorious, and the evaporating ponds were home to lots of waders and shorebirds!  Spoonbills, ibis, and herons were the big boys, while the shorebird gang included gobs of Least Sandpipers, Long-billed Dowitchers, a few Stilt Sandpipers, both yellowlegs, and singletons of Solitary, Spotted, and Pectoral Sandpipers, plus an Avocet that joined the crowd at the last minute!  Gull-billed Terns were batting around and calling, but the real highlight was a group of Fulvous Whistling Ducks, an unexpected lifer for Peter!  Several Bank Swallows were flying over giving their raspy calls, but finally we caught sight of another of Peter’s targets, a fluttery little Cave Swallow!

Evaporating Pintail Lake is a haven for waders! 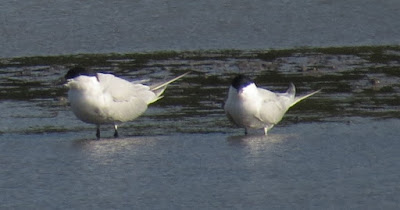 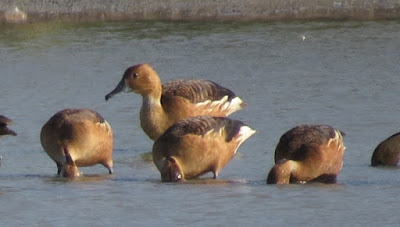 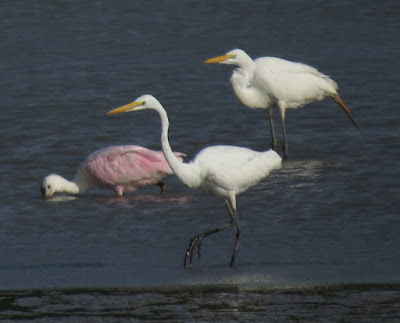 
The very last pond was bone dry, but the one across from it had quite a bit of water and housed Neotropic Cormorants and a couple of White Pelicans, plus more shorebirds.  While scanning I came across a Green Kingfisher which another couple was able to enjoy, and Peter spotted a distant kettle that turned out to be Mississippi Kites, another lifer!  Gleefully, this kettle drifted right towards us and broke into a solid wave going overhead where the kite shape of the birds was very evident!  We also saw a couple of Swainson’s Hawks, and on the way back a Gray Hawk circled overhead. Another wave washed overhead, this time made up of Scissor-tailed Flycatchers! 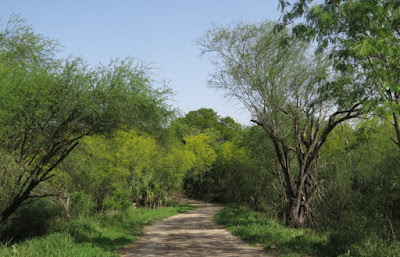 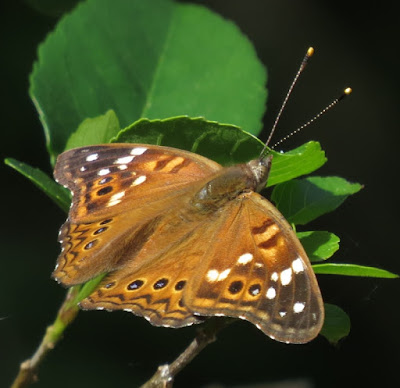 
Heading back along the road we ran into birding buddy Huck Hutchins who had a couple of Hooded Orioles staked out, and as we re-entered the Tower Trail we found another Green Kingfisher, this one quite close!  My guidees from yesterday, Jim and Russell, ran into us about that point (they bemoaned the fact that they hadn’t seen much), and then Peter spotted another kettle, this time mostly Swainson’s Hawks.  I decided it might be best to go back to the main road at that point, as we’d have more sky to look at, and that turned out to be a good decision as right away Peter’s life Altamira Oriole sat up in a distant tree, and finally a Brown-crested Flycatcher sat in the open next to the road!  We also had an adult and immature Harris’ Hawk on the way back, Chachalacas in the feeder area, and while trying to kick up a Clay-colored Thrush in the picnic area I heard a Bronzed Cowbird sing, which Peter said would also be a life bird, so we went into the parking lot and found him up on the cell tower!  Just before we left a nice male “Black-backed” Goldfinch gave good looks. 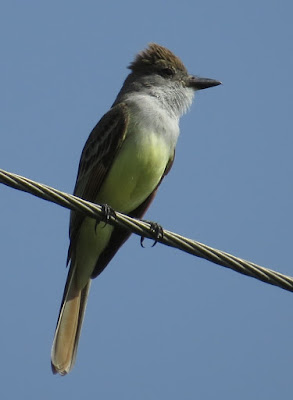 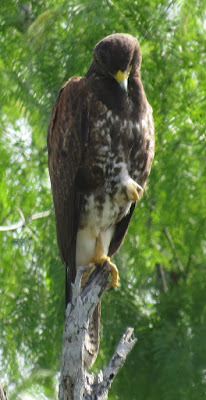 From there (after a brief stop at Coffee Time J) we headed up to Brushline Road via Hargill, and with the wind and heat I wasn’t expecting a whole lot, but we actually got some good views of some things:  Lark Sparrows and Scissor-tailed Flycatchers were cooperative along the wires (except when Peter wanted to get a flight shot J), and the day’s only Red-tailed Hawk perched on a tall pole.  A pair of Common Ground Doves was another lifer, and one looked rather cinnamon to me, but after a better look I realized it was just wishful thinking… J  I heard the slow chatter of a Bullock’s Oriole at some point that finally shot over to give us a brief look.  There’s a pond on private land where the owners have put some sort of a screen up, but another couple was stopped and told us that they saw some dogs killing a deer in there!  We got into a position where we could peek in and saw a pair of Caracaras in there, but there also indeed was a dead exotic deer in the pond… While Peter was shooting the Caracaras I heard a Least Flycatcher giving its quiet whit call. 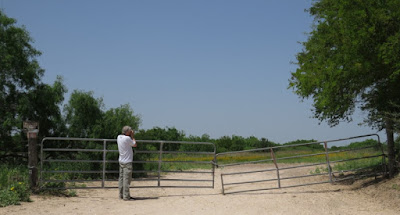 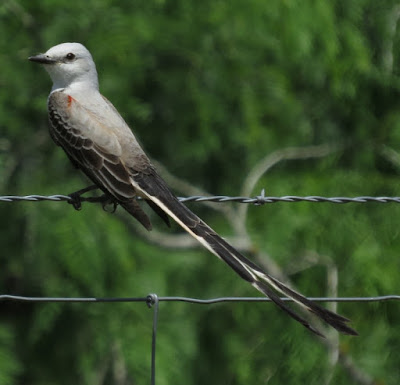 A more cooperative one shows up later on a wire! 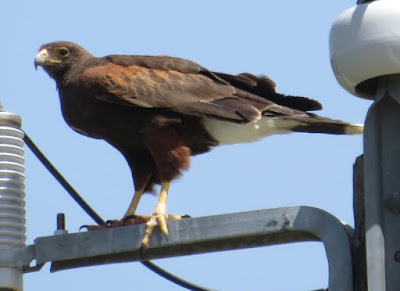 
In the actual NWR tract were tons of Pyrrhuloxias, and we heard a Bobwhite but none showed (nor did any Roadrunners, which was a first).  A Cassin’s Sparrow sang, and Peter was able to get a glimpse of the bird as it skylarked!  Heard some Turkeys gobbling in the distance while stopped for another Scissortail, and a couple of Savannah Sparrows popped up on a fence.  The flowers were absolutely stunning along the road, and we stopped many times just to take pictures!  Snaking up to the ponds, I was having flashbacks of the Purple Gallinules I had up there years ago when I thought I heard one call (it sure matched the “kik” call on the app), but additional hidden vocalizations proved to be Common Gallinules…  The main pond only had a Pied-billed Grebe and a Cattle Egret in with the bulls, so we headed back to Ken Baker Road.  Crawling down that road finally hit pay dirt with a brilliant White-tailed Hawk and a cooperative Caracara on a pole!

Riot of flowers along Brushline Road 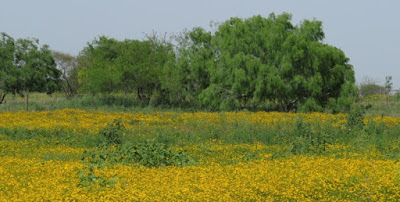 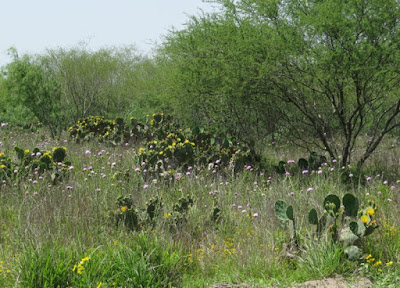 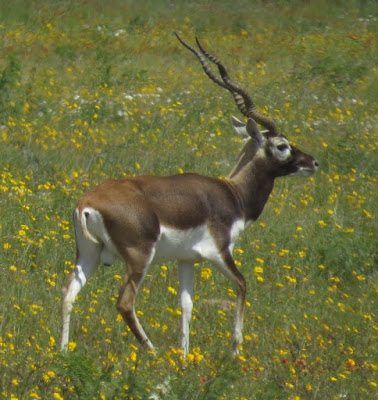 Blackbuck on a game ranch

Can you see the Blackbuck in this picture? 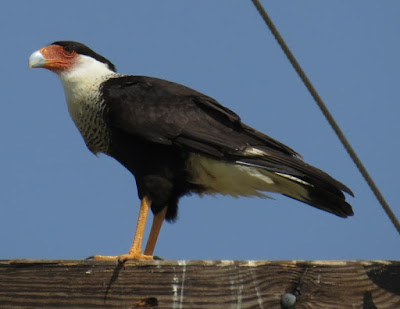 
We had to scoot after that, with a quick stop at the grass field north of the Donna Walmart (with nothing to show), but we managed an unbelievable 101 species for the day!  Bird list: