For our last day together we were going to try and clean up some target species easier gotten in Cameron County.  We started at Palo Alto Battlefield, where a Curve-billed Thrasher got the list off to a great start!  This is by far the easiest place to get Cassin’s Sparrows, and we weren’t disappointed!  After picking up a Bewick’s Wren in a yucca coming out of the VC parking area, we crawled down to the far parking lot, and we had barely gotten out of the car before we saw the Cassin’s Sparrows singing, skylarking, and otherwise just putting on a great show; one even landed almost close enough to touch!  In with them was a Grasshopper Sparrow that most got a brief look at, and we also added Lincoln’s and Savannah Sparrows to the mix.  A pair of Harris’ Hawks got our juices going at first, and Eastern Meadowlarks were all over.  A Cactus Wren in the big cactus patch gave fleeting views as well, but the star of the show was a lovely hovering White-tailed Kite!  Walking back, a Bobwhite fed contentedly under a bench, and we heard the bright chink of a Sedge Wren.  Back at the visitor’s center a stunning male Hooded Oriole showed off! 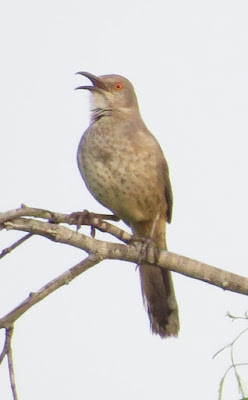 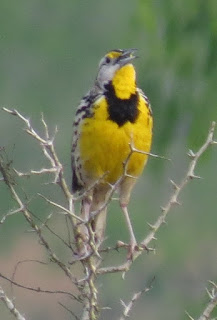 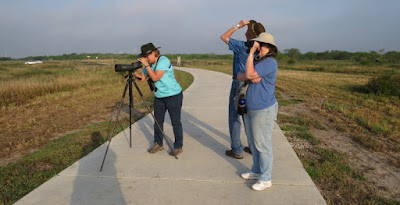 The gang enjoys their life Cassin's Sparrow (below) 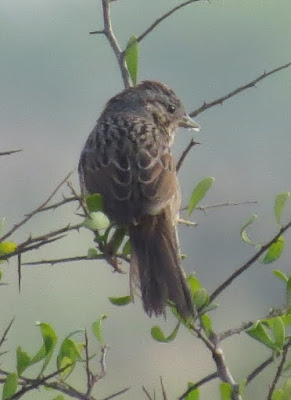 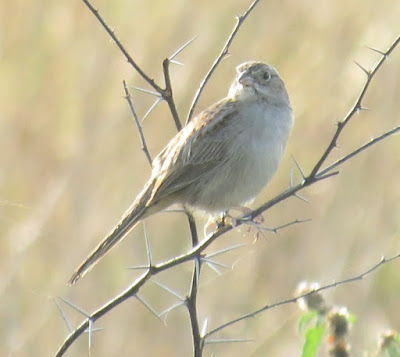 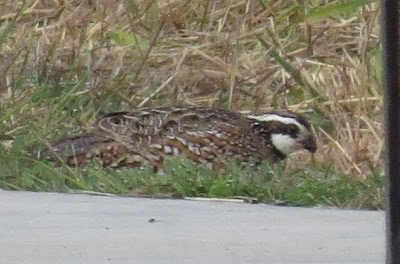 
From there we headed south to Old Port Isabel Road, and while the Aplomado Falcon eluded us, we got great looks at the White-tailed Hawk pair, lots of Long-billed Curlews, and show-off Gull-billed Terns near Loma Alta Lake.  There was enough overcast to make out a single Roseate Spoonbill along with several Coots and a couple of White Pelicans (which later flew over), and at the “traditional” falcon spot we had a cooperative pair of Chihuahuan Ravens as well as a Belted Kingfisher!  We padded the list with both ibis species and several ducks at both ponds, including American Wigeon, Ruddy Ducks, and a female Bufflehead!  A Fulvous Whistling Duck had been reported, but we never found that one…  It was nice to get both Tropical and Couch’s Kingbirds talking, and Scissor-tailed Flycatchers were all over! 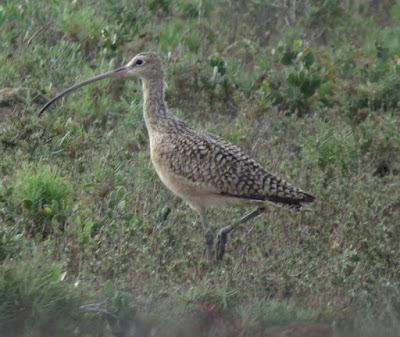 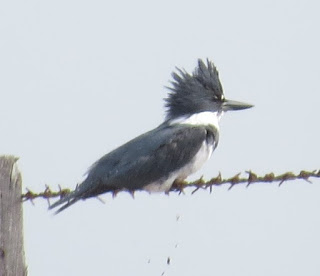 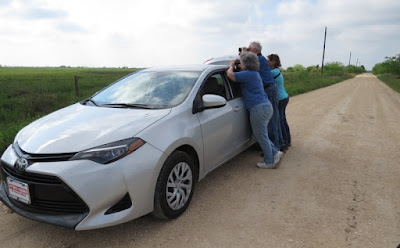 The crew checks out the field... 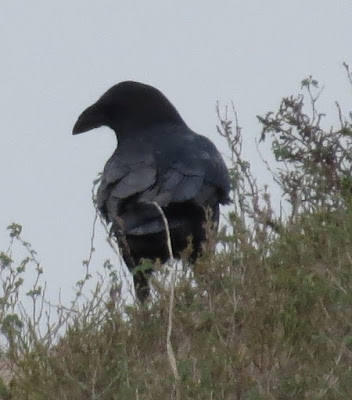 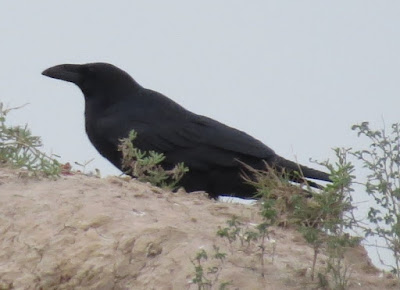 As expected, the road became impassable at the old pipeline intersection, so we turned around, picking up a couple of Horned Larks on the way out.  After a Stripes Stop we headed down Boca Chica Boulevard, and unless I’m losing my mind, the Aplomado nesting platform just past the checkpoint had disappeared!  (I know it can sometimes be blocked by a bush, but we looked for it from every conceivable angle…)  We had a nice Harrier as a consolation prize…  A guy from Ontario stopped when he saw us, and as we chatted he informed us that the road was closed further up due to Space-X rocket testing, so that shot our chances at getting Reddish Egret on the flats L, but we still checked out Palmito Hill for falcons and Cactus Wrens.  We found neither, but the girls enjoyed the history lesson provided by the interpretive signs!  We did log another magnificent White-tailed Hawk, and down in the wooded area (much of which has been cleared by the new landowners, I guess) a Long-billed Thrasher shot across the road, and we had a pair of Roadrunners that made our day!

Gail and Ron read all about the battle... 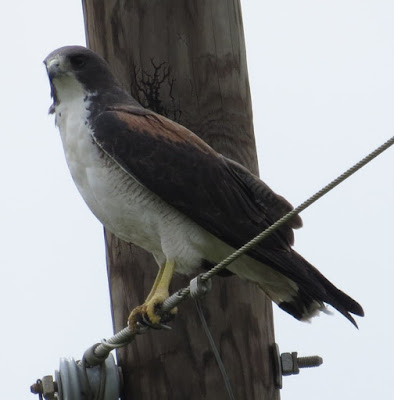 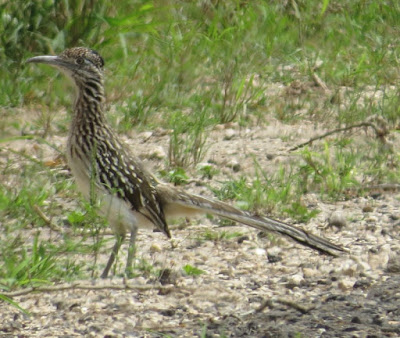 Next stop was the Highway 48 Boat Ramp for another shot at Reddish Egret; dipped on that, but we really padded the list with some great shorebirds and larids including American Oystercatcher (a life bird for Gwen), Avocets, Ruddy Turnstones, Sanderlings, Skimmers, and several tern species along with the Laughing Gulls.  In the heron department we got a pretty Tricolored and some egrets, but not the one we were hoping for…  We checked the wetland on the west side of the highway (accessible from the southbound lanes), but no egret there, either.  By that time we had to decide whether we wanted to go all the way to the South Padre Convention Centre (and deal with the Spring Breakers), so figuring they could get the egret in Florida, they opted to try a last ditch effort for the Aplomado at the SR100 viewing area. 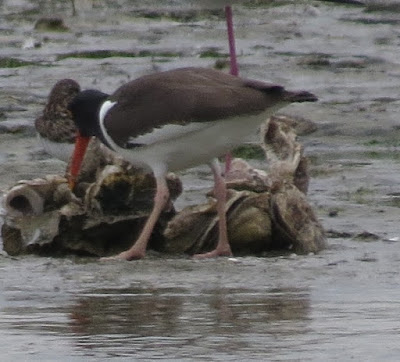 So away we went, stopping first across from the “Blue Shack” where we didn’t pick up anything except the funky cactus growing on the power poles, so then headed on to the “official” viewing area.  There we finally hit pay dirt, as one of the Aplomados was sitting pretty on the nesting platform with his back to us, and even though it was heat-wave induced, you could still make out that white eyeline!  A group from Montreal wheeled in after us who were also super excited, as this was their first time to Texas as well!  The raven going after the Harris’ Hawk was almost ho hum! 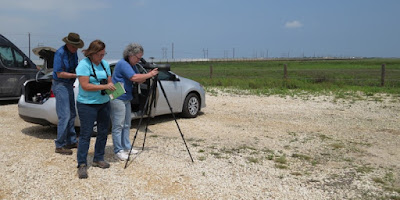 The gang enjoys a heat-waved view of the Aplomado Falcon (below)!

Keith had offered to take them to see the Elf Owl that night, so we headed on home, where we all focused on putting air into Heppy’s rear tire before kissing goodbye!  We hit the 80 mark once again with 89 species, and as Ron wrote in their note to me afterwards, they hoped for 20 lifers and got 50!  What a blast!