Met Tom and Pam outside the Garden Suites this morning for a general hunt for our local specialties!  With all the rarities around I gave them that option, but they opted for Estero Llano Grande State Park (which never disappoints J), and I’m glad they did!


We started as per usual in the parking lot, where we didn’t get far as a flock of Red-crowned Parrots was yelling over at the golf course across the street and occasionally flying around for a look!  A Long-billed Thrasher sat out in the open as he sang for us, letting us know that spring was just around the corner (as they never seem to sit up until it’s time to proclaim their territory)!  Once in the Tropical Zone Tom was worried that we were gonna wake Rick and May Snider (our intrepid park hosts) up as a feeding flock consisting of gnatcatchers and kinglets was right outside their RV!  We managed scope looks at the Golden-fronted Woodpecker but the Ladder-backed wasn’t as cooperative…  A Clay-colored Thrush was chased away by a Mockingbird, but a Couch’s Kingbird sat up on one of the pines and called for us!  White-winged Doves were all over, and we managed a nice look at a titmouse in a bare tree while a Purple Martin sailed overhead.  I almost walked right past a Curve-billed Thrasher sitting almost within touching distance on a cactus, just singing away as well!   Then, interestingly, someone (Tom, I think) spotted another thrasher feeding on the ground that looked like that funky bird other birders had found in the area that was finally ID’d as a Long-billed/Curve-billed hybrid!  He had the chest streaks of a Long-billed but then that was replaced by thrush-like spots, plus he had the white tail tip of a Curve-billed – a strange bird indeed! 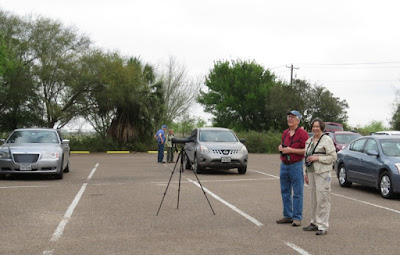 Tom and Pam in the parking lot at Estero 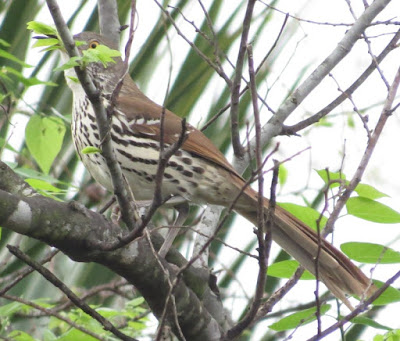 Thrasher #1 - Long-billed in the parking lot 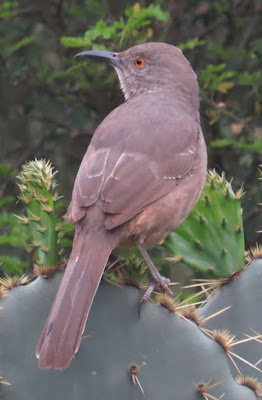 Thrasher #2 - Curve-billed in the Tropical Zone 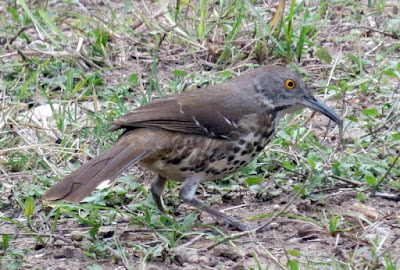 Thrasher #3 - the funky presumed hybrid, also in the TZ (also below)! 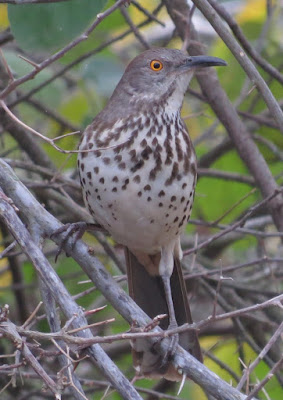 Down at the feeders we got wonderful views of Chachalacas, Green Jays, Orange-crowned Warblers, Cardinals, more titmice, and finally a White-tipped Dove that pranced across the floor!  In the Indigo Blind we joined a couple of photographers who were “friendly competitors” and entertained my charges with their stories!  But aside from more jays, blackbirds, doves, and a noisy Kiskadee (plus a pair of Fox Squirrels chasing each other), the feeders were pretty quiet.  The female Hooded Oriole made a brief appearance outside the blind, however. 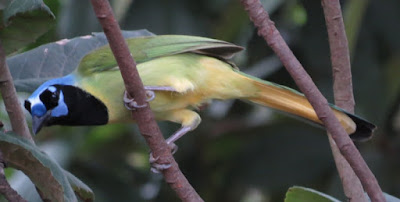 We came back by way of the Tyrannulet Trail (I think – it was the middle one with the hummer feeder at the picnic table), and while trying to pull a White-eyed Vireo out, what I assumed was a Blue-headed Vireo came out to play, but from my initial views he looked awfully gray overall with very little yellow (just a faint wash on the vent), but since my experience with Plumbeous involved birds showing no yellow whatsoever, I wrote it off as a Blue-headed until proven otherwise…  Once I got home and analyzed the brief video I was able to get (and consulted the Sibley), I learned that first-year Plumbeous can indeed show a pale yellow wash, so the video grabs I posted on Facebook and eBird are now open for discussion!  Pam was able to get a brief look at the Buff-bellied Hummingbird as it whizzed back and forth, chattering up a storm, but Tom was unfortunately unable to get on it…  A brilliant Vermilion Flycatcher played hide and seek on top of a tree near the park host area on the way out. 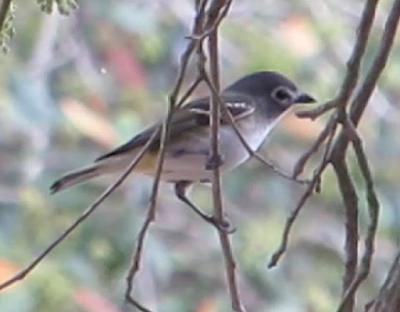 Video grabs of a first year Plumbeous Vireo (no one's challenged it, anyway...) 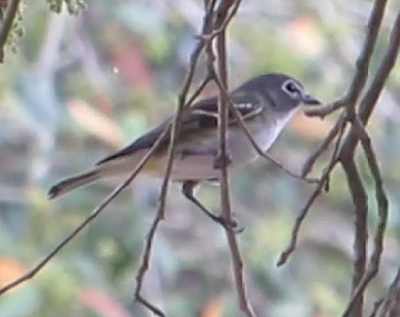 From there we headed to the VC where we saw that several school trips had descended upon the area, so we made a command decision to head straight to Alligator Lake and get the Pauraque first, then take our time coming back!  We had a hard time doing that, however, as we were compelled to enjoy the Shovelers and teal in Ibis Pond, and at Grebe Pond a lady Green Kingfisher demanded our attention!  We bypassed the night heron spot briefly (where members of both species were cooperatively snoozing out in the open) to find the Pauraque, where another couple had just found him, but couldn’t refind him for us!  (Isn’t that always the way?? J)  I think it was Pam that actually spotted him close to the barrier, just as pretty as could be!  We then returned to the night heron spot and enjoyed Anhingas and a Neotropic Cormorant (the Pied-billed Grebe was ignored J) where we ran into Gunnar and Lorna, two of our Winter Texans at the Inn, and while chatting with them another gentleman came and asked us where the Pauraque was, so Pam volunteered to show him, only she couldn’t refind him, either! J  We finally did – always a fun game to see peoples’ reaction when they finally do see him! 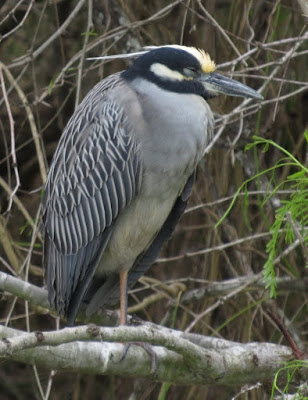 We took our time heading back, finally finding the Least Grebe at Grebe Marsh (plus many red-eared Sliders, including several babies), and ran into a couple who had seen the Virginia Rail right out in the open!  But did he do that for us?  Of course not!  We passed Ranger John with one of the school groups, instructing them to all say hello to us (which they did J)!


Tom and Pam preferred a sit-down lunch, so since the next spot was the La Sal area, we calculated that we’d get to Raymondville right about lunch time, and I suggested a little hole-in-the-wall spot that the Birder Patrol had visited once called the Boot Company.  We managed to find it, and I think Pam was actually afraid to go in, as it was just a blank building with no windows and a plain beat-up door that looked like it went into one of those seedy nightclubs, but the inside was a whole other story!  Filled with locals, antiques, and great food, we thoroughly enjoyed our lunches (and the pecan pie was to die for)!


From there it was actually closer to bird the La Sal Viejas area, so we headed for the famous CR 20, which was dry as a bone now but we still managed some nice birds in the thornscrub:  a Bewick’s Wren came out briefly (a Lark Sparrow was “snorting” up a storm but never showed), and a calling Ash-throated Flycatcher was a nice surprise!  We had nice comparative views of both yellowlegs at the actual La Sal Viejas, and on the “dicey” part of Ken Baker what I thought was their Lark Sparrow in bad light turned out to be a Vesper Sparrow upon closer inspection (Savannahs were all over)!  On the “good” part of Ken Baker we finally got the Pyrrhuloxia, plus a pair of high-flying White-tailed Hawks!  I heard some very distant Sandhill Cranes along with Cassin’s Sparrows starting to proclaim their territories, but unfortunately we never saw any of either…  But what we thought was a stick at first turned out to be a Mexican Racer (best guess anyway) with his head sticking up!  He let us get great looks as he checked us over before finally lowering himself and slithering off… 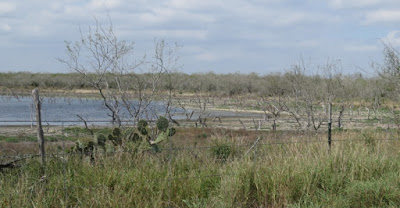 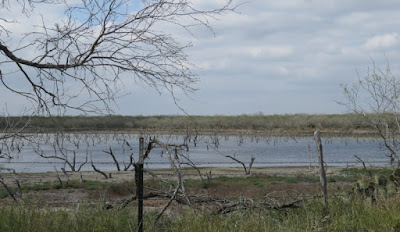 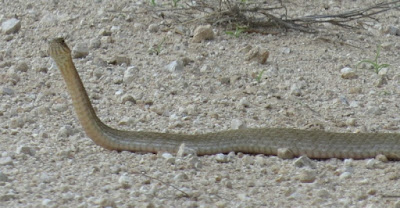 A Mexican Racer checks us out 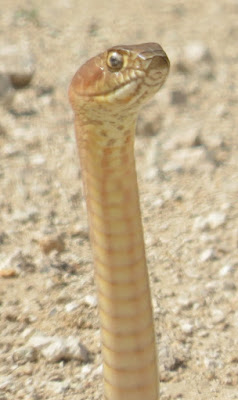 We needed to take off after that, but not before nearly running down a Roadrunner that darted out in front of us, plus a big black Indigo Snake that made haste off the road!  (Pam was sure we had a third snake, but neither of us could recall the incident…)  The final tally was a respectable 77 species for the day!  Bird list: