Blocked from the Beach


Wanted to get out to the coast today, so decided to survey the portion of Boca Chica Boulevard that goes through the NWR tract and down to the beach.  About a half mile past the Border Patrol checkpoint is a good place to stop and look for Aplomado Falcons (as there’s a hacking station to the north), but none were about today.  But a lot of Valley birds were singing up a storm:  Olive Sparrow, Long-billed Thrasher, a calling Altamira Oriole, Bobwhites, and even the first of several Botteri’s Sparrows giving their clipped songs!  About two miles up the road, the powers that be really improved one of the roads going into the NWR (according to Google Maps this appears to be Gavito Ranch Road), and this was a wonderful place to go slow and listen and look for thornscrub birds (where a Long-billed Thrasher popped up to pishing)!  In a more open area the Chachalaca couples were calling back and forth in the distance, and the occasional Dickcissel would fly over.  Common Ground Doves were all over the road, and White-eyed Vireos actually got flagged by EBird as I had entered so many!  (At half-mile stops with at least one or two birds singing at each stop, they add up fast when you cover 14 miles!)  The road virtually ends a little bit into the cotton field, as the main road hangs left but there’s also a sign clearly stating the area beyond it is closed, so that's basically the turnaround point for that leg.  A real surprise down there was four Chimney Swifts flying overhead! 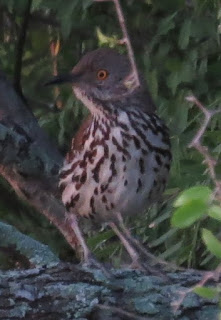 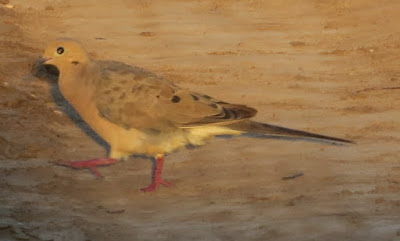 Mourning Dove prancing across the road in early morning light 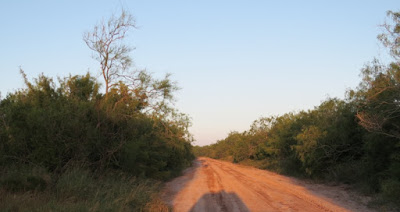 Back on paved Boca Chica, it looks like they’re widening the road, and indeed multiple big rigs roared by and turned off to an area to the north, with two Constables guarding the entrance either way.  Had a Caspian Tern fly over at one stop (followed by a squealing youngster), and a handful of Caracaras and Harris’ Hawks along the way.  Palmito Hill Road is another good, wide dirt road that goes into the NWR tracts, and the open areas with lots of cactus had (of course) Cactus and Bewick’s Wren (with a Carolina singing in the distance), more Botteri’s Sparrows, and meadowlarks.  This road also turns into good thornscrub habitat, and at the turnaround point I was surprised to see a Roadrunner actually running towards me (and I wasn’t even messin’ with him by cooing at him)!  He was quite a ways down the road at first and ended up almost right at the car as he rattled his bill; I wouldn’t be surprised if there was a nest near where I parked.  At the same spot several Cave Swallows rattled overhead, and on the way back had a beautiful pair of White-tailed Hawks posed on a pole. 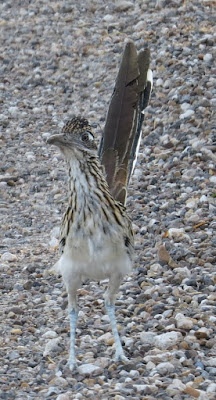 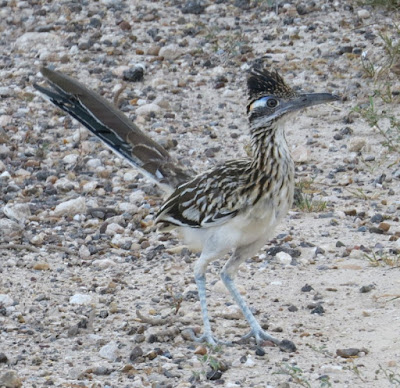 Recording of his rattle 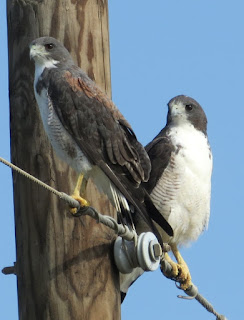 Continuing on Boca Chica, one stop happened to be right next to a group of Groove-billed Anis!  Not to be outdone, a Yellow-billed Cuckoo sang nearby, soon to be joined by his mate!  It wasn’t too long past that that that I reached the first part of the Flats area, but alas, Heppy apparently decided he had had enough of this stop-and-go stuff and refused to start!  A couple of Good Samaritans tried to jump him, but to no avail.  About a half hour later a nice State Trooper happened by, and when he attached the cables and cranked the key, Heppy started right up!  (Guess the cop scared him… J)  So I never made it to the beach (or even to “Dan Jones’ Road” to the river, although I was tempted just to drive down there and not stop), and as it was already past 11:00, I just headed on home.  Discovered to my chagrin when I got home that in my excitement I forgot to throw my three-legged stool back in the car and drove off without it! L  Oh, well; it’s an excuse to get one of those nice ones with a back! J 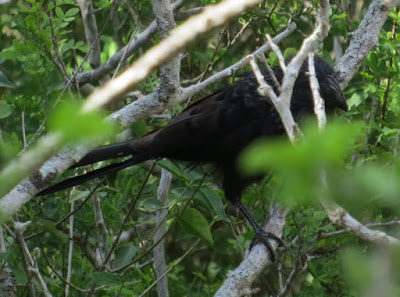 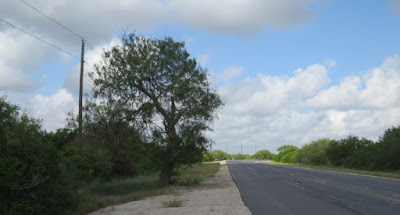 Stop along Boca Chica Blvd. where the anis and cuckoos were 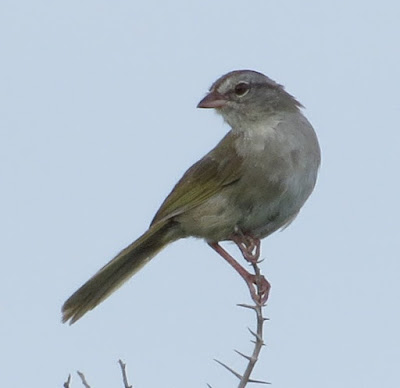 Olive Sparrow (above and below) 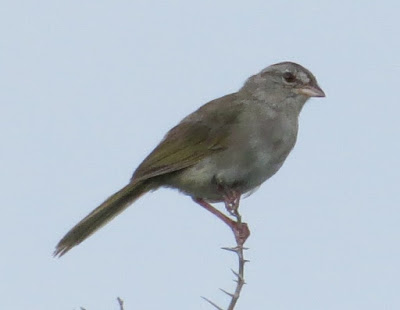