A train delay in Indiana made for a later-than-expected arrival for my Amish guest Gary and his two sons Jonathan and Jesse, but it worked out for the best, as by taking a daytime train down they were able to add a few lifers to their list, such as Harris' and White-tailed Hawks!  But it's always nicer to get a good, solid look at these beauties, so after I picked them up and they had a chance to refresh, we were off to Weslaco for some afternoon birding!

Only as we pulled into the drive at Frontera Audubon, the closed gate reminded me that they were closed on Mondays! :-O  No worries; we could snoop around the butterfly garden and pick up some Valley specialties, as this was their first time to South Texas!  All three of them were great spotters, and they even carried walkie-talkies to keep in touch when we split up (which proved to come in handy on more than one occasion)!  It wasn't long before Jonathan found their first Chachalacas huddled in a citrus tree, and thanks to the feeders we were able to add Buff-bellied Hummingbird, Black-crested Titmouse, Green Jay, and Inca Dove to their list in short order!  Kiskadees and Golden-fronted Woodpeckers were easy, along with more Orange-crowned Warblers than they were used to seeing up north! 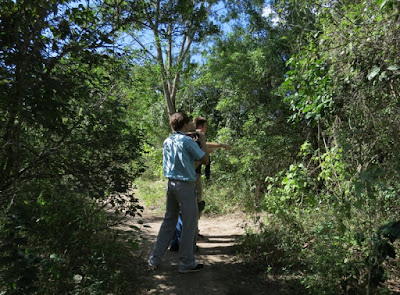 The guys enjoying their first Chachalacas at Frontera Audubon!

Estero Llano Grande was by far the highlight, however, with lots of ducks off the deck and their first Least Grebes!  An immature Black-chinned Hummer came to the feeder while we were there, and after enjoying the various waterfowl, we headed over to Alligator Lake in hopes of Pauraque and the "McCall's" Screech Owl.  A scan around Dowitcher Pond actually produced a pair of White-tailed Kites, but the Bufflehead that had been reporting wasn't showing himself.  We searched Grebe Marsh without success for a Green Kingfisher, but a White Ibis next to a big ol' Alligator had the boys digiscoping like crazy!  Before long Gary (who had gone on ahead) was whistling to us - he had found a posing Green Kingfisher!  The night herons also showed well, but we searched and searched for the Pauraque in vain (although a baby Alligator was a nice consolation prize).

White Ibis keeps an eye on a rather large Alligator! 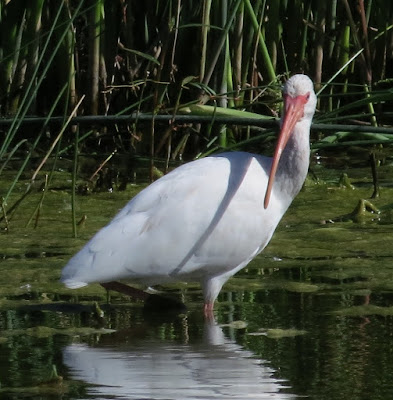 Close-up of the White Ibis 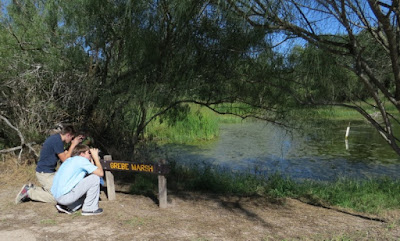 The guys waiting to see if the ibis becomes dinner for the alligator... 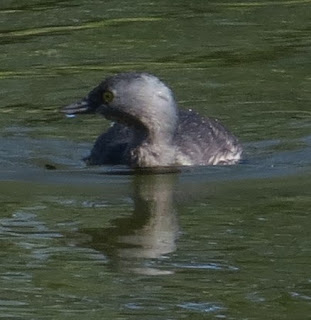 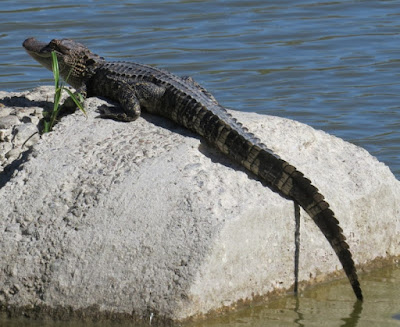 Baby Alligator getting some sun

Since a Sage Thrasher had been reported earlier, we decided to go up on the levee, and while the thrasher didn't show, a nice Ringed Kingfisher did row by nicely!  We had good views of Avocets, White Pelicans, and Roseate Spoonbills up there along with other waders and shorebirds.

We took the back trail to the Tropical Zone in hopes of White-tipped Dove, and while back there we ran into Park Host Huck, who pointed us to another stake-out Pauraque who showed beautifully!  Some American Robins happened by while Huck mentioned he had seen Clay-colored earlier along with the young Bullock's Oriole. 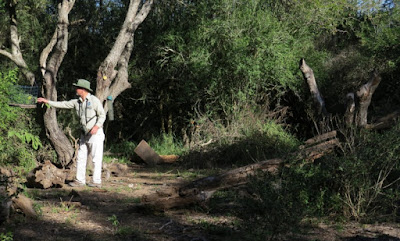 Huck puts out food for the doves 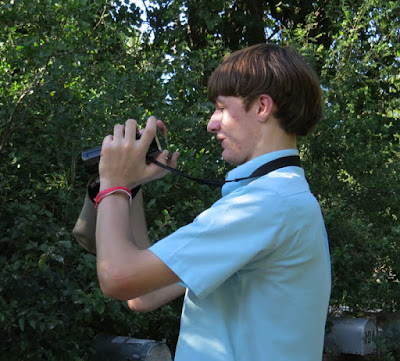 After that we moseyed back to the car and headed over to cruise the neighborhoods of Weslaco and listen for Red-crowned Parrots coming in to stage.  We cruised, and cruised...and cruised....and as sunset arrived I was really despondent that we hadn't heard a squawk (but we did find a Merlin ripping into his dinner with gusto)!  Giving up, we headed north towards the freeway when guess what - a whole flock flew right overhead!  Gary said, "That's good enough!" and we headed home!