About a dozen people gathered to take a cruise down Boca Chica Boulevard for some coastal plain and beach specialties!  Norma led the way out of Stripes on Ruben Torres, but at the road construction we lost the two lead cars, and Pat and I followed by Alan and Baceliza ended up following a pickup going east and eventually down a little dirt road called Medford that had a great little wetland that was stuffed with stuff, including a Wood Stork!  Someone got on the horn and had the other two cars come over, and as it turned out, this was the little spot that Alicia had wanted us to stop at on the way!  Several kinds of herons and shorebirds fed, including all three common peeps, lots of juvenile Common Gallinules, a young Gull-billed Tern, and our only Wilson's Phalaropes of the day!  In the songbird department we had Loggerhead Shrike, Tropical Kingbird, a Curve-billed Thrasher, and a singing Carolina Wren, while a Ringed Kingfisher flew overhead 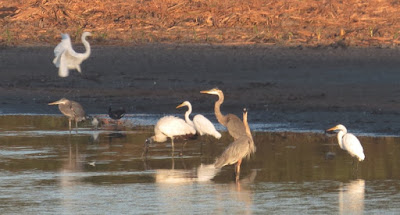 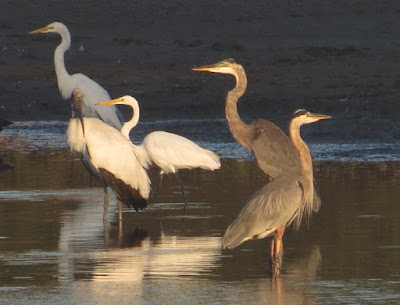 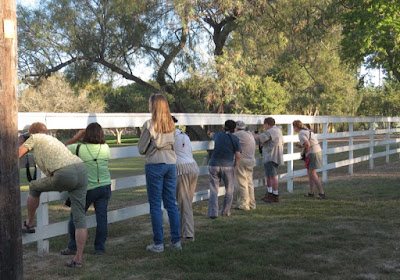 Gang trying to see the birds through the fence...

On we went, and I encouraged Norma to lead again as she and Alicia are the better spotters! :-)  We stopped at the hacking station just past the Border Patrol checkpoint, but unfortunately had no Aplomado Falcons; in fact, it was rather quiet at that stop.

So on we went to the viewing platform in the National Wildlife Refuge, where quite a few things were singing but very little showed themselves:  Botteri's Sparrows, a Roadrunner, White-eyed Vireos, Bewick's Wrens, and Verdin were all present but uncooperative.  An empid of some kind did pop up, but we couldn't tell which at that distance (except that it wasn't a Yellow-bellied).

Heading down the dirt road we had a large flock of White-faced Ibis fly overhead, plus lots of Eastern Meadowlarks flushing.  Both Barn and Cliff Swallows fed low over a little marsh, and an Upland Sandpiper flew overhead unseen.  Turning the corner into the thornscrub, I drove around the next corner to take a "break" where a Roadrunner was standing in the middle of the road and a family of Groove-billed Anis flew across!  Heading back to the gang Norma put out her hand to indicate that they had something, and as I walked up, they thought they had a Yellow-green Vireo!  Most of us never saw the bird, but they felt confident about the ID based on what they saw.  A couple of Yellow Warblers showed up across the road, and a sharp pit alerted us to the presence of an Alder Flycatcher, which soon popped up for all to see!  Thankfully another family of anis crossed the road, so everyone got to see them.  On the way out a beautiful Eastern Kingbird posed, and a White-tailed Hawk flew by in the distance. 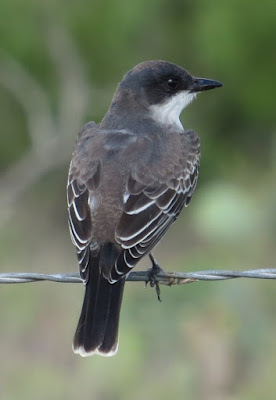 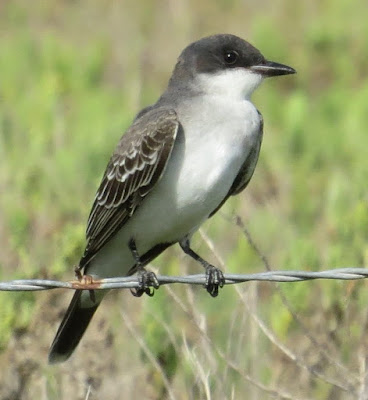 From there we headed to "Dan's Road," but not before stopping for a load of shorebirds (in the sun of course), where we managed to pick out a couple of Snowy Plovers along with a Semipalmated, several dowitchers, some Reddish Egrets, and a couple of Horned Larks.  Heading down Dan's Road to the river we picked up a squealing Royal Tern and a Neotropic Cormorant for the day along with a Spotted Sandpiper, and since Dan had reported Seaside Sparrows last month down the "bad" part of the road (which at the moment actually looked pretty good), we decided to brave it and head down!  There was quite the hump to get over at one point, and we marveled later at the fact that Marilyn was able to get her Toyota Sierra over it, but we discovered later that she had found another route in... ;-)  We found the mangroves, but no sparrows; I think we had a Long-billed Curlew in here, and Pat spotted a nighthawk snoozing on a branch while Norma spotted a female Belted Kingfisher that the rest of us missed, but that was about it.

The gang looks for Seaside Sparrows

Bumping back out we finally made it down to the beach, where only Pat and I in "Heppy" (my new Forrster) and Alan and Baceliza followed almost down to the mouth of the river (some had to go home, and Norma and her crew wanted to look for sea beans).  It was actually quite productive, with lots of Sanderlings, Ruddy Turnstones, Piping Plovers, a couple of Wilson's, and the real prize - four American Oystercatchers!  On the way back we scared up a Ghost Crab that was a big hit, along with a couple of juvenile Least Terns. 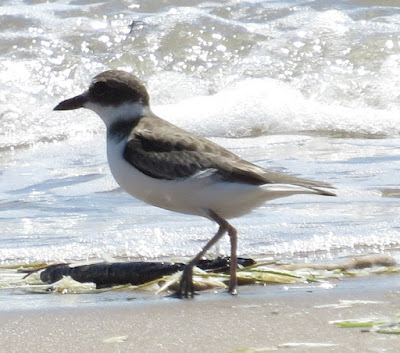 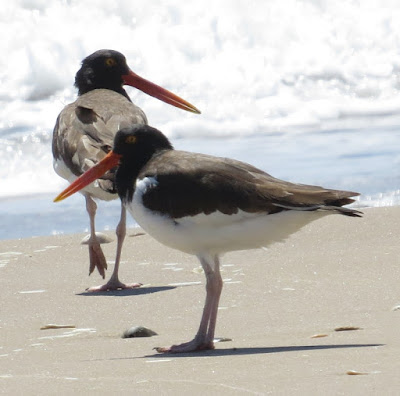 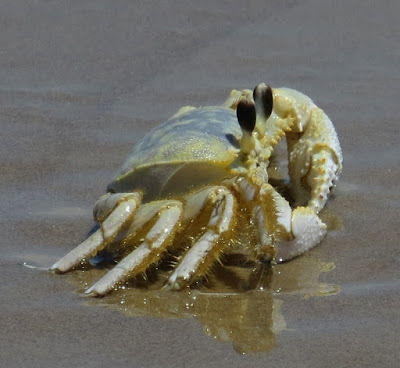 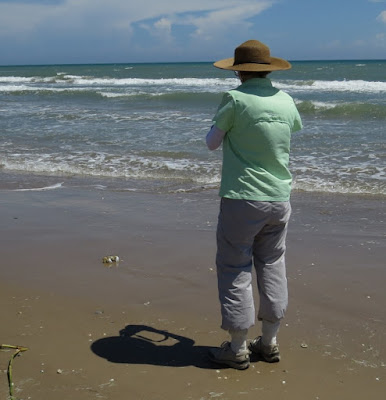 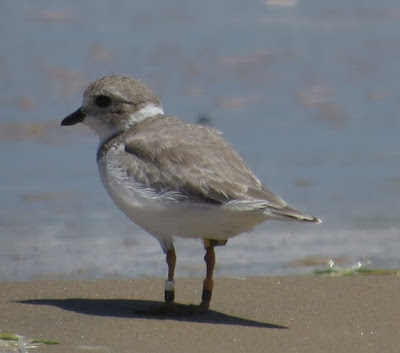 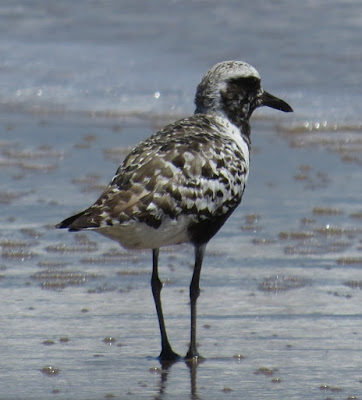 We called it a day after that, having much better looks at all the Harris' Hawks we had passed on the way down!  Bird List: