It was about this time last year when the Collared Plover showed up at Hargill Playa for the second year in a row, so we decided to run this month's Birder Patrol trip to check the playa, plus other fast-drying wetlands for shorebirds.  We rolled in from various parts of the Valley around 7:00, ending up with four vehicles altogether, and viewed the playa from the north side.  There was a good selection birds there; although we couldn't find a Wilson's Plover (a normally coastal bird that has taken up residence here), we did find several Snowy Plovers, along with Least and Stilt Sandpipers, both yellowlegs, dowitchers, tons of Laughing Gulls and Black-necked Stilts, and four tern species which included Black, Least, Caspian, and Gull-billed.  Both Roseate Spoonbills and White Ibis kept flying over in lines, and songbirds included nice looks at Dickcissels.  A big surprise was three Chimney Swifts overhead, only because I usually get these in the city!  An amusing sight was a Green Heron on the telephone wire!

The Harlingen contingent of the Birder Patrol arrives at the Hargill Playa (note the mist in the background)! 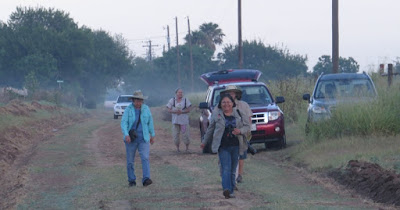 Paula and Alicia lead the pack! 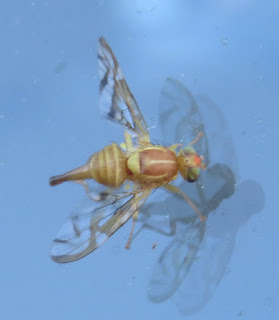 Looking for goodies over the playa

From there we headed up to the ponds along CR20; even though out in the boonies, I had advised everyone to park beyond the ponds as the road where the ponds actually are is rather skinny, and cars do go through there (in fact, we had at least four go by while we were there)!  A Glossy Ibis had been reported here, and there were indeed several Plegadis type ibis, but none that we could definitively call a Glossy (although we did find a White-faced with a very pink face).  The oversummering female Pintail was still there, along with a couple of Ruddy Ducks and just tons of Wilson's Phalaropes, Avocets, and Least Sandpipers, along with a few odd herons.  Probably the best bird was a female Vermilion Flycatcher that was flopping around.  On the way out a nice White-tailed Hawk showed off for us.

Checking out the birdies at CR20

From there we tootled over to the 1015 Pond, which was totally and absolutely dry, so then we headed on to Sugarhouse Pond, which we heard was drying up fast, and indeed it was, but there were still good numbers of birds WAAAY out there; Long-billed Curlews and Coots were new for the day, but otherwise it was just more Avocets, phalaropes, stilts, and gulls pretty much.

It was still pretty early, so Pat suggested we try and see if we could access Valley Acres Reservoir, as this was a tremendous spot we covered during the Weslaco CBC.  It's imperative that you ask permission, however, and while we waited Pat went into the hangar to do just that and instantly made friends with Tiger, their Pit Bull "guard dog"!  Javier, the guy on duty, gave us his blessing (and a bunch of cards in case anyone wanted to make arrangements to come back at another time, as there is good habitat all around the lake), and this is truly where we hit the jackpot:  not only was the reservoir full of water, but it was full of birds as well!  The island of trees across the way was loaded with Wood Storks, and down below (where we had the young Brown Pelican during the CBC) were several White Pelicans, but what tickled most everyone were the hundreds of Fulvous Whistling Ducks packed along both sides of the island like a platoon of little soldiers, so much so that we thought it was a spit of land at first!  Families of Black-bellied were around as well, of course, but there was also a mob of Least Sandpipers on shore, amongst which we were able to pick out at least one Semipalmated and one Western! 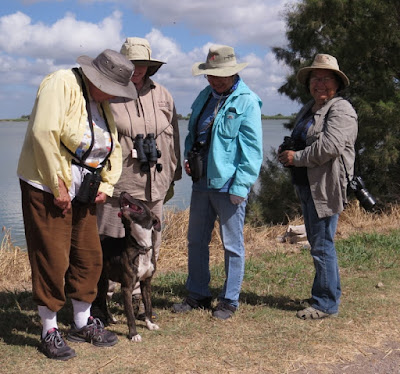 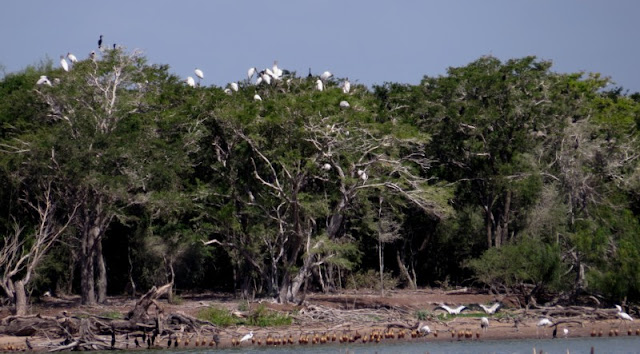 Wood Storks are hanging out in the tops of the trees and spreading their wings at the bottom, but look carefully for just a small portion of the Fulvous Whistling Duck mob! 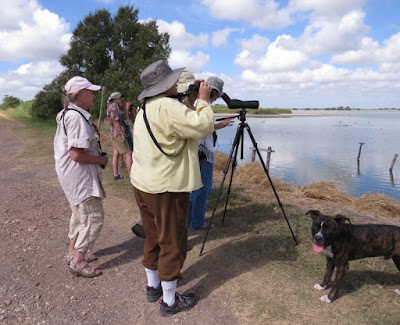 Linda, Sue (in the back) and Pat checking out the mob
We called it a day after that with 67 species for the morning!  Bird list: