Recording Birds on the Beach

I had mentioned to George that I had gotten good recordings of shorebirds right from the car on South Padre, so on Monday they called saying that's exactly what they wanted to do!  So I picked them up in Los Fresnos and we headed over to the Island, where you can drive right on the beach of the Laguna Madre.  I had checked the tide tables to make sure we were hitting it right, and the tide was indeed out, but there were a lot of big water puddles and the birds were waaaay out there!  Hoping I wasn't having another cocky "This-is-a-Subaru-he-can-do-anything" moment (the last one got me stuck in a swamp in Arizona), we slowly picked our way across the beach and swung around so that the birds were on George's side.  I shouldn't have been surprised that the birds weren't as talkative as they have been when I've been out here in the spring (at those times you could hardly hear anything for the Laughing Gulls), but the Dunlin were chirping and giving their keeek! calls occasionally, and we got great looks at several Piping Plovers.  The Larid Flock consisted mainly of Black Skimmers and Royal Terns, and every so often the skimmers would lift off and give George a sample of their funny nasal nyep sounds!  Out in the bay were Red-breasted Mergansers and Redheads, and at one point one of the Redheads actually gave his cool "mewing" sound!  We kept hearing this squeaking that I suspected was a young tern, and sure enough, we found a full-grown, adult-plumaged Royal Tern that was still begging from Mom/Dad!  Both flavors of pelicans were also out, but of course they weren't saying anything (although the Great Blue Heron gave a great sample as he squawked annoyedly). 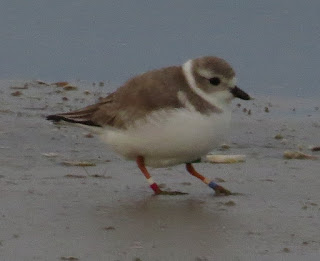 Piping Plover with colorful "bling" that identifies where the bird came from! 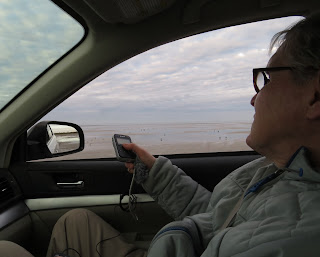 George records the shorebirds from the shelter of the car!

From there we headed over to the Convention Centre, where I explained what a haven it was for migrating birds in the spring!  Right now it was rather quiet, but a few things chattered from the boardwalk; unfortunately George didn't have his recorder running when the best bird sounded off:  a Least Bittern!  The snoozing Roseate Spoonbills were a big hit, and a Black-necked Stilt feeding like an Avocet (swooshing its bill back and forth over the water) was a first!  George was entranced by all the cool noises the grackles were making; their Commons in Minnesota aren't nearly as creative in their vocalizations!  The Common Gallinules cackled once in awhile, and the resident showoff at the end of the boardwalk gave Wanda a great show for her IPhone!  A Belted Kingfisher that had the "birding shelter" staked out rattled for us as well.  At the end of the north boardwalk a Reddish Egret (with a few white primaries) did a little dancing while two Tricolored Herons faced off.  It was deja vu when another Reddish Egret near the Birding Center's boardwalk started grunting while he fed, as one did that very thing for me one time and gave me a recording!  This guy was a little further away, though...  Thankfully George had his recorder going when a pair of Clapper Rails did their "grunting duet"!  On the way back through the mangroves, I heard a sharp pink! that I thought was a Swamp Sparrow at first, but that little voice in the back of my head was saying, "Are you sure that's not a Northern Waterthrush??"  And while a Swampie would like the reeds, the waterthrush would definitely prefer the mucky areas under the mangroves, so after George and I analyzed both calls later (and admitted they were very similar), he concurred that what we had heard (and he recorded) was a waterthrush.  Meanwhile a couple of very friendly Collared Doves walked up to us and said hello!  On the way back to the car a Catbird shot across the sidewalk. 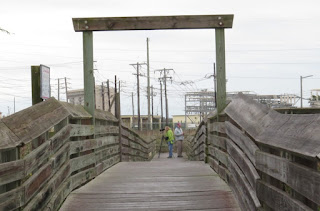 Wanda and George on the boardwalk 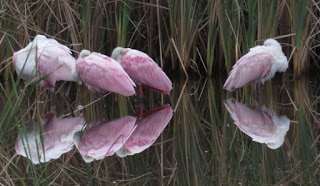 Another birder scans the mudflats from an island 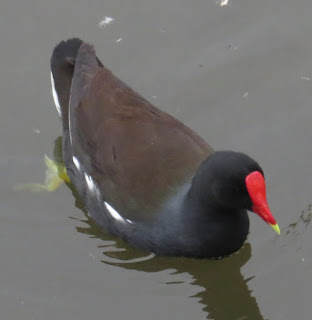 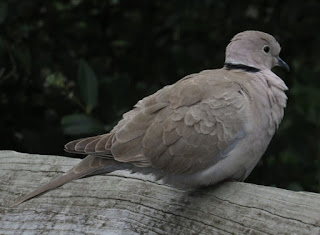 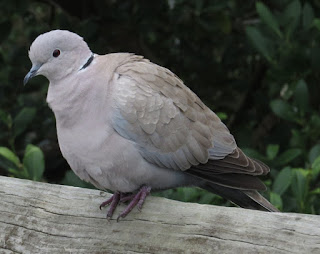