On Sunday, January 3rd, I picked up Wanda and George (names changed to protect privacy) for a day of hopefully capturing some great sound recordings!  They had originally booked me for Saturday the 2nd, but with a forecast of 100% rain and temps in the 40s (pretty miserable for south Texas), they agreed to switch to Sunday.  Because they had to be in Los Fresnos that afternoon, we opted to take two cars.

It was still pretty nippy and overcast, but at least it wasn't raining (although it was misting a bit, so I didn't take my camera on our first walk...)!  We traveled first to Santa Ana NWR, where one of our signature birds, the Great Kiskadee, was only too happy to oblige and gave Gordon a great "argument" to record!  On the Chachalaca Trail most things were "calling" as opposed to singing, but some of the birds he attempted to capture included a Long-billed Thrasher, a Black-crested Titmouse, and a Hermit Thrush (a Northern Beardless Tyrannulet called in the distance while he was recording something, but I'm not sure that got picked up...)!  At the Willow Lakes overlook, the Coots were very cooperative in their vocalizations, and even the Gadwalls gave a few "nyeps".  I'm ashamed to say that I had totally forgotten about the wintering Jacana until the thing flew across the lake on stiff, golden wings, then promptly disappeared into the grass!  Unfortunately it didn't vocalize as it did the last time I saw it fly across; what a treasure that would have been for George's collection!  He was able to capture duetting Pied-billed Grebes, however, along with a Sora in the background!

I thought maybe the shorebirds at Pintail Lakes might give us some samples, so we headed over there, picking up a noisy Green Jay and a singing Carolina Wren for George's collection!  We ended up adding about three feet of clay to the bottom of our shoes, however, and unfortunately by the time we got to the wide open spaces the wind was kicking up, so we bailed on that idea and just made a circle.  But all was not lost:  we had a pretty young male Vermilion Flycatcher and a chubby Bobwhite running down the trail in front of us!  I gave Wanda some lessons in shorebird ID as we had both species of yellowlegs and some Long-billed Dowitchers fairly close at hand (the Black-necked Stilts were the easy ones...).  The highlight for me was a "V" of about 50 Sandhill Cranes flying overhead, but being from Minnesota, they really get to see the crane show!

From there we headed over to Estero Llano Grande SP, where some Chachalacas were making a ruckus at the feeders near the visitor's center, so George was able to capture that!  There were too many happy visitors on the deck to do much recording, but between Park Host Huck and myself we were able to show Wanda some of the pretty ducks, including a couple a showy Cinnamon Teal and a snoozing Wilson's Snipe.  The boardwalk was closed, so we headed over to Alligator Lake, picking up a pretty American Wigeon in Grebe Marsh and several night herons of both flavors tucked into a tree close to the trail.  I've never been very good at the "Find the Pauraque" game, so I was sweating a little when we got to the spot where the park's resident pair regularly snooze away the day, but I needn't have worried as #1 was practically on the trail, about six feet away from us!  Number 2 was close by, and I almost collapsed as a third one suddenly became visible!  (I was told that was "Huck Jr."...)  At the overlook another couple pointed out a Green Kingfisher to us, and while no Alligators showed themselves, an Anhinga showed off its wing-drying activity.  Back on the Camino de las Aves we ran into a feeding flock where Gordon was able to record a Blue-gray Gnatcatcher and Ruby-crowned Kinglet, but things were quieting down by then. 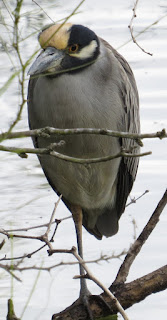 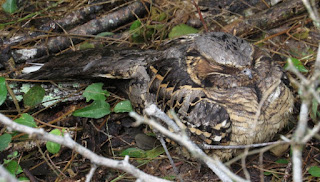 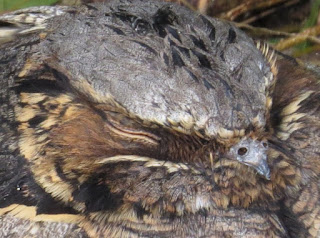 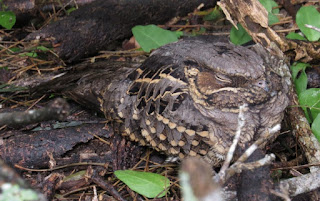 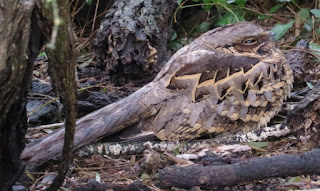 Pauraque #3  (I was trying to describe their call with a poor imitation - maybe that's what woke him up...) 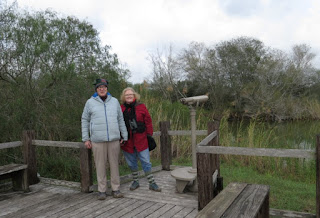 George and Wanda at the Alligator Lake overlook 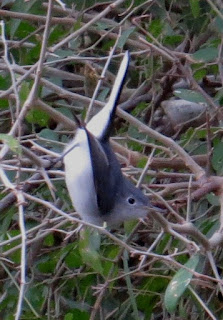 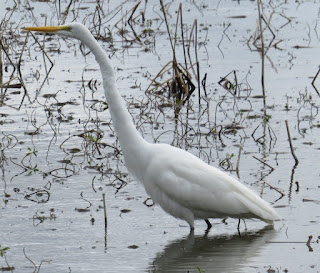 Great Egret from the deck
Everyone was getting hungry so we opted to go to lunch; they wanted burgers, so I had to introduce them to Texas' own Whataburger (or as our Birder Patrol group calls it, "What-a-birder"...)!
It's true that you tend to tune out ambient noise unless you're trying to make a recording, and then all of a sudden every distant vehicle, every plane, every human voice, and even every breeze becomes magnified!  So with that in mind, for the afternoon shift we opted to go to Resaca de la Palma State Park, as I figured that would be far enough away from traffic noise to give George a chance to hopefully get some "purer" recordings.  Well.  In all the times I had visited the park I had never heard a train go by (and a squealy one at that)!!  You can't win for losin'! :-)﻿  We may have gotten some distant Red-shouldered Hawks, but it was pretty quiet by then, so after a good long walk into the heart of the park we enjoyed the Green Jays coming in for eats at the blind! 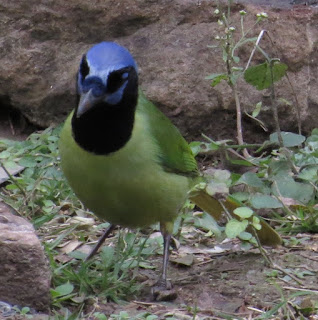 A Green Jay ponders his lunch... 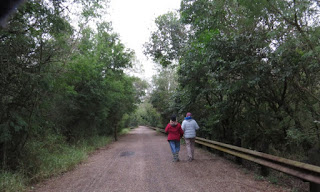